Memorial tree for tragic farmer could grow to 40m 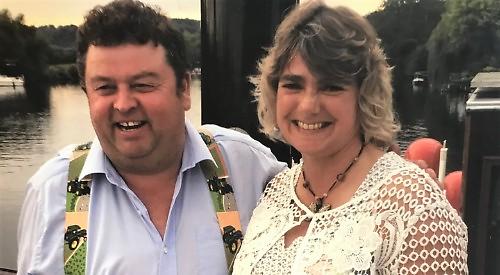 A TREE is to be planted in memory of a Hambleden farmer who died tragically last month.

Friends and relatives of Oliver Bowden, who ran Mill End Farm, will plant a Lebanese cedar sapling beside Couchfield Barn, off the footpath on the village outskirts, next spring.

The tree, which could eventually grow up to 40m, will be accompanied by a plaque mounted on a brick and flint plinth.

Organiser Kate Waddington, a lifelong friend of Mr Bowden, hopes to hold a formal ceremony in which members of his family will break the ground and shovel on the final clump of soil.

She has also launched an online appeal to pay for his sons George, 13, and Archie, 11, to follow him into the profession. So far it raised more than £17,000.

Mr Bowden, 56, was the third generation of his family to run Mill End Farm. He started working there at the age of 16 and took the reins from his father, George, upon his death in 1993.

He was killed in an incident involving his livestock on May 5.

Two weeks later, hundreds of people turned up to watch his funeral procession parade along Marlow Road with a convoy of several dozen tractors, 4x4s and quad bikes.

A pre-inquest review into his death is to take place in August.

Mrs Waddington, 56, who runs Roundhouse Farm in Fawley, befriended Mr Bowden when they attended the former Highlands School in Peppard together and they rode the same bus when he went on to Moulsford Preparatory School and she to Cranford House, also in Moulsford.

They remained close throughout their lives and Mrs Waddington’s daughter Jess would play with Mr Bowden’s daughters Isobel and Rosie when they were children.

Mrs Waddington, who took part in the funeral procession on her quad bike, said: “Oliver had a real love of life and was more or less always smiling.

“He was such an amazing friend – he was so helpful and you could always count on him to be there in a crisis.

“I heard about his death shortly after it happened and, like so many in this community, I was absolutely devastated.

“I was so pleased with the attendance at the procession, which in many ways was better than a funeral as you could never have got that many people into a church.

“It was so emotional and nobody who attended will ever forget it. There was so much love for him and that’s why I thought a permanent memorial was appropriate.

“It would be nice to think that people will sit there in centuries to come and think ‘that Oliver Bowden must have been someone special’.”

Mrs Waddington launched the fund with help from a friend and said she was amazed when it soon passed the £10,000 target so she doubled it.

The appeal has now raised more than £22,000 including a £5,000 donation from the Culden Faw estate, which owns much of the neighbouring land

She gave £1,000 herself while others gave the same or £500 and there were smaller contributions from people who didn’t know him but were moved by the reaction to his passing.

Mrs Waddington said: “The messages left by donors are lovely, saying what a jolly character he was and generally showing their love.

“I picked £10,000 because I had to choose a number but all donations will be welcomed.”

The money will pay for George and Archie, who want to become farmers, to get the necessary qualifications such as vehicle licences.

Mrs Waddington said “There are lots of videos on Facebook of the boys on the farm and they’ve never shown sign of any other goals.

“I wanted to help because they’ve had to step up and become men overnight.”

The Bowdens said: “We are so pleased with the plans for the tree. The fundraising campaign is overwhelming and we certainly didn’t expect it as Oliver has made sure the children will be looked after.

“But while we were embarrassed at first, we’re touched that people want to express their appreciation in this way.

“Oliver was always so generous to everybody, not just in terms of money but also his time and energy, so we understand that people want to pay that back and are very grateful.”