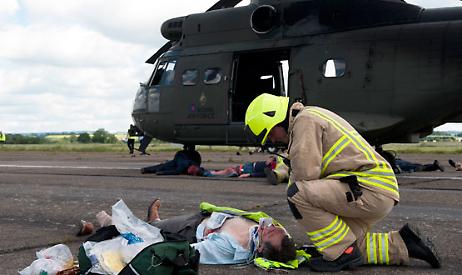 The scenario was the aircraft had landed heavily at Chalgrove airfield after developing problems in the air. There were 10 casualties.

There was also a simulated crash landing of Hawk jet after its tyre burst at the RAF base.

Flt Lt Steph Seale-Finch, second-in-charge, station operations squadron, said: It was a crash exercise that were required to do every couple of years.

This was quite an advanced one in that it involved off-station incidents and all the civilian emergency services as well as ourselves.

Personnel from RAF Benson provided specialist advice to the emergency services as well as setting up a cordon around the area to safeguard any evidence.

It is vital that were all trained and ready for the unexpected, said Flt Lt Seale-Finch. Well continue to work and practise together to ensure the best results for everybody in the future.