Thanks for saving my life, says man who collapsed in street 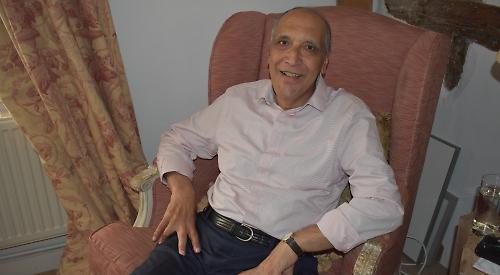 A MAN who suffered a cardiac arrest while shopping in Henley has thanked passers-by who saved his life.

José Goumal collapsed in Bell Street while walking back to his home nearby on Saturday, April 6.

Three women and the driver of a delivery van stopped to help him, calling 999 and
administering CPR while they waited for paramedics to arrive.

They were later joined by an off-duty doctor and paramedic and fetched a defibrillator from nearby Rupert House School, which was used on Mr Goumal seven times to regulate his heartbeat.

He was taken to the Royal Berkshire Hospital in Reading, where he underwent an operation to install a cardioverter defibrillator in his chest.

Now he is back home and has thanked the people who helped him, saying that without them he would have died. Mr Goumal, 73, who lives with his wife Sam, 75, said: “They were utterly brilliant. Not only the coincidence of who turned up but everyone who did knew exactly what to do.

“One girl said she knew the traffic was dodgy on Bell Street so the first thing she did was to get out on the road and direct traffic. Someone else knew the defibrillator was nearby. It’s so difficult to thank people because you run out of words.” Mr Goumal, a former chartered accountant who has lived in Henley since 2001, said he had no recollection of the 20 minutes or so when he was on the ground.

He said: “I was coming back happy as could be without a care in the world and as I went past Adam Court it was completely out of the blue.

“I felt the bag falling out of my hand and myself falling. I don’t remember hitting the pavement but I must have had a thud because I ended up with a cut lip and tongue and a bruise on the back of my head.

“That was the last I knew until I was in the back of the ambulance.

“A woman called Petra Hughes was the first girl on the scene and another, Rachel Dobson, ran out and stopped traffic. It turns out that the doctor was a cardiologist from the Royal Berkshire Hospital called Hannah Zacharias. Apparently, she gave me CPR six times. I’ll be eternally grateful to her.

“People have told me if it was not for all these coincidences I would probably be a goner. They’ve got to know they saved a life.” Mrs Goumal, a former singer, said she saw the ambulance from their home but didn’t initially realise it was for her husband.

She said: “I couldn’t understand why he was taking so long. Eventually I went upstairs to get my shoes and go out but when I came back down the doorbell went off. I thought it was him but it was two coppers telling me it was serious.

“My brain went to complete mush. We’d been watching the Grand National and there were no problems whatsoever. I was sitting there and suddenly I’m in an ambulance going like the clappers.”

Mr Goumal was discharged a day after his operation and is now being cared for at home by Edna Villaflor, a friend and nurse from London.

He said the operation was done with a local anaesthetic and took about an hour and 20 minutes.

Mr Goumal said: It was a brilliant service — I was very impressed. We’ve always used private medicine but because this was an emergency we got into the NHS and it was an eye-opener.” He also praised the Millie’s Dream campaign, which was responsible for installing the defibrillator at Rupert House, saying his ordeal proved the worth of the device.

His wife said the couple felt lucky that so many people stopped to help them and now want to get in touch with everyone involved to thank them.

Mrs Goumal said: “A friend of ours across the road had pieced most of the story together and from what she said there were three ladies, one who rang for an ambulance and one who stopped traffic.

“The van driver, Darren, came by and asked, ‘do you need help?’ He had just done a course but was terrified because he hadn’t used it. He said he was terrified he’d done something wrong but it was probably that which saved his life.

“The person who helped me more than anything was Amanda Chumas, my friend from over the road. She was so fantastic, she was going to dinner when she found out and left to run to the hospital.”