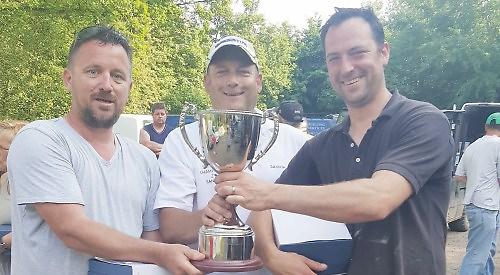 THIRTY-SIX anglers lined the banks of Bowsaw and Billhook Lakes near Odiham on Bank Holiday Monday for the Remenham Rodney Pook Memorial Pairs tournament that is now in its eighth year.

Pairs winners on the day were Remenham angler Ade Bowles and his partner Richard Arkell. Arkell won his section on Billhook with 59lb 8oz of carp caught on the inside on the pole with meat whilst on Bowsaw Bowles secured third position in his section with 98lb 2oz of carp landed on the pole and method feeder giving them a total of four points, the same as second placed Mark Bowerman and Darren Wright, but taking first place with a superior overall weight (157lb 10oz to 105lb 2oz).

On the day £340 was raised in aid of the Royal Berkshire Hospital intensive care unit.