What it means when your heart skips a beat (no, not falling in love) 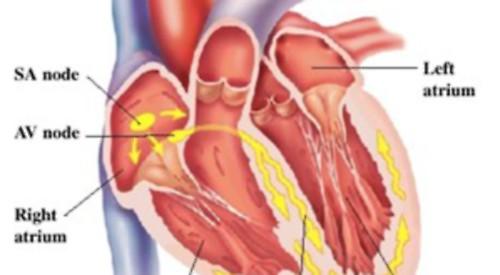 DURING the Twenties a condition later dubbed “sweet clover disease” began to afflict the cattle of the North American prairies.

The animals’ deaths were particularly unpleasant as they succumbed to internal bleeding without any obvious cause.

Understandably, the farmers wanted to find out why and it soon became clear that the sweet clover the cattle were grazing on was the source of the issue. More specifically, as it had been a particularly damp year, the mould growing on the sweet clover was the real culprit.

A biochemist called Karl Link isolated a substance called coumarin which, in an oxidised form, caused an anticoagulative (blood-thinning) effect on the blood. He decided this would be good to use as a rat poison and with funding from the Wisconsin Alumni Research Foundation, he developed warfarin.

In the mid-Fifties, researchers assessed warfarin’s potential therapeutic use as an anticoagulative agent to treat people at risk of blood clot-related problems. President Eisenhower was even given the new drug after having a heart attack.

Nowadays, it is perhaps most well-known for its use as an anticoagulant for people with a condition known as atrial fibrillation, which is an abnormal rhythm of the heart.

To explain atrial fibrillation, it is worth knowing what the normal scenario is. Our hearts beat more than 100,000 times a day and, if all is well, each beat is carefully paced by a small patch of tissue in the top of the heart called the sinoatrial node.

At regular intervals this patch of tissue lets out a spontaneous electrical signal, which travels down through the heart tissue and contracts the heart muscle as it goes.

The heart consists of four chambers: two atria (the small chambers at the top) and two ventricles (the larger pumping chambers that make up the bulk of this organ). To get to the muscle around the ventricles, the electrical signal first has to pass through the atria and the atrioventricular node in the middle of the heart, a sort of check point.

This means the atria will contract first, pumping blood into the ventricles. Once the signal has been delayed a bit by passing through the atrioventricular node, the ventricles will contract and will send blood out of the heart into the big arteries, either to collect oxygen from the lungs or to head out to the rest of the body to deposit that oxygen in the tissues.

Atrial fibrillation (colloquially known as AF) occurs when there are random signals coming from rogue bits of tissue around the atria as well as the sinoatrial node.

These signals cause the atria to contract chaotically (fibrillate). We don’t necessarily feel this but when the chaotic electrical signals reach the atrioventricular node, some get through and some don’t.

The steady beat from the sinoatrial node gets a bit lost in the mix and so the atrioventricular node will start passing random signals through to the ventricles and this will create what we call an irregularly irregular heartbeat.

There have been various analogies to explain atrial fibrillation, some more obscure than others — from nightclubs and bouncers manning the flow of punters to ripples in water and even a conductor conducting an orchestra.

This being Henley, I think a rowing analogy is particularly appropriate. Think of the sinoatrial nodes as being the cox shouting out a steady beat. If, for some reason, the cox suddenly loses their mind and starts shouting and rambling madly, each rower will lose that rhythm and will choose different moments to plunge their oars into the water. Momentum is lost and the whole system loses its efficiency.

This analogy illustrates a major issue with atrial fibrillation in that, if the rowers are not synchronised, their performance is greatly reduced.

To return to reality, if the heart beat is all over the place, the blood is being pumped out far less efficiently, giving rise to fatigue, shortness of breath, dizziness and potentially a build-up of fluid in the tissues as the circulation slows.

Having said that, the impact varies between individuals and some people may not even realise they have atrial fibrillation at all.

So why was I rambling on about cattle and warfarin at the beginning? Well, because the blood flowing through the heart in someone with atrial fibrillation is chaotic and significantly increases the risk of clots forming and being thrown off into the bloodstream, travelling up to the brain and causing a stroke.

Anything that anti-coagulates the blood, therefore, significantly reduces this risk. It is thought that around 2.5 per cent of the population in England has atrial fibrillation.

In 2016, it was estimated that around 1.4 million people experience it, though about 425,000 of these may be undiagnosed and therefore untreated. It seems to be more common in men and certainly the risk of developing it is much greater with advanced age.

Often there is no obvious reason to have developed it but it has strong associations with things like high blood pressure, heart attacks and heart disease.

Acute infections can sometimes be all it takes to trigger it and thyroid conditions, among others, can be a factor.

Paroxysmal AF, among others, refers to cases where a person gets only short runs of atrial fibrillation, typically less than seven days and sometimes only a few hours.

If you are diagnosed with atrial fibrillation, there will be an assessment as to whether or not using an anticoagulant would be appropriate. This is because the small bleeding risk associated with anticoagulants can sometimes exceed the benefit, for example if you are prone to fall and bang your head a lot, it won’t necessarily be appropriate.

These days, there is a new class of drugs called novel oral anticoagulants, such as apixaban, rivaroxaban and dabigatran, which are much more convenient than warfarin.

Warfarin requires regular blood tests to control the levels in the bloodstream but these newer medications require no such monitoring.

Unlike warfarin, their effect is not reversible quickly if there is a big bleed but effective antidotes to these drugs are coming through.

In addition to blood thinners, someone with atrial fibrillation may be started on other medications to keep the heart rate under control. A beta blocker like bisoprolol is an example.

If, however, the atrial fibrillation is causing serious symptoms, then it may be necessary to carry out what is known as a cardioversion in which an electric shock is introduced to try to reset things.

Cardioversions can be carried out using various drugs too. Ablations of areas of the atria (burning and cauterising tissue) causing the rogue signals are another option these days and can be done using a device inserted into a blood vessel at the wrist or groin.

Clearly, if you are feeling dizzy or fatigued with perhaps some palpitations, it might be worthwhile getting this checked with your doctor who might then request an ECG, some blood tests and even a chest X-ray.

“Fast atrial fibrillation” is when your rate goes into the 100s, often as high as 150 beats per minute and this can start dropping your blood pressure in which case a trip to accident and emergency may be on the cards.

If you want to check your pulse, it is always worth doing this manually at the wrist or in the neck as machines and gizmos can be fooled.

Most commonly, if you feel the occasional “skipped beat”, it will be something known as an ectopic beat and this is perfectly normal. If it’s irregularly irregular for 30 seconds or more, however, then it is possible you might have atrial fibrillation so it’s best to get this checked.

There are, of course, lots of different arrhythmias, some more serious than others, and so, if you are ever in doubt, see your doctor.