Why speedy treatment is so important if you suffer a stroke 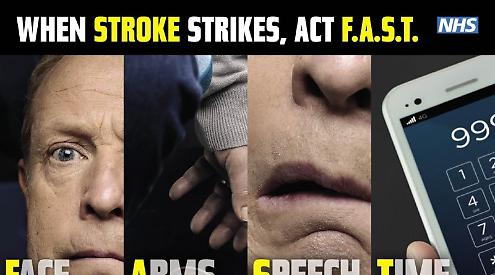 MICHAEL JOHNSON, the four-time Olympic gold medallist and at one time the fastest man over 200 metres, was finishing a workout at his home in 2018 when he suddenly noticed a tingling in his left arm and an involuntary movement in his left foot.

While he didn’t know what was happening and was in no pain, he knew something wasn’t quite right.

After considering things for half an hour, he decided to go straight to hospital. This was, in hindsight, an excellent move as by the time he got off the scanning table, he could no longer bear weight on his left leg and his left foot was completely numb.

The athlete once referred to as superman was, at the age of 50, having a stroke.

There are more than 100,000 strokes in the UK each year — one every five minutes.

In 2017, there were more than 29,000 deaths. As we know from Johnson’s story, while it is far more common in the older population, one in four strokes happen in younger people, even children. That makes it an important thing for everyone to be aware of. While there are certain conditions and genetic tendencies that make someone more prone to a stroke, there are several risk factors applicable to us all that we can work on to reduce our chances of having one. I will come to these later. First though, what is a stroke exactly?

Put simply, it is damage to brain cells caused by an interruption of blood supply. This interruption can be due to either a blockage of a blood vessel or a bleed.

When a blood vessel blocks and the blood doesn’t get through to a tissue this is known in the medical world as ischaemia (from the Greek “iskho” meaning restrain and “haima” meaning blood).

Around 87 per cent of strokes are ischaemic. The rest can be due to a vessel or an aneurysm bursting and bleeding, placing blood in an area in which it should not be and diverting it from where it should be.

Either way, considering how vital our brains are, that should not be seen as good news.

Moreover, considering the fact that different parts of our brains control certain parts and functions throughout the rest of the body, the effects of a stroke will depend on where the interruption to the blood supply takes place.

Like Johnson, a stroke can present with weakness or numbness in a limb but it can also cause a drooping of the face, slurring of the speech or something more subtle like a sudden loss of balance and co-ordination.

People will often describe an inability to say the words they mean to say or indeed understand the words that others are speaking.

Likewise, loss of vision or sudden blurriness can mean something is going on not in the eye itself but in the brain. Hippocrates, without the knowledge of modern anatomy 2,400 years ago, described people who exhibited these symptoms as suffering from apoplexy — literally “struck down by violence”.

The word stroke itself is thought to be from the 1590s when such things were referred to as being a “stroke of God’s hand”.

It wasn’t until a Swiss man called Johann Jacob Wepfer noticed from doing post-mortems that strokes were caused either by ischaemia or haemorrhage in the brain.

Until very recently, treatment of a stroke has been limited. It had been known since Wepfer that clots breaking off and going into the smaller vessels of the brain cause the ischaemic issue.

In the early 1800s, operations were carried out to remove the clots from carotid arteries, a form of which is still used today.

The carotid arteries are a common site for these fatty plaques (atheromas) to build up, increasing the stroke risk in the process. This is akin to blockage of the coronary arteries that, if blocked, cause heart attacks.

A breakthrough came in the Seventies in the form of CT scanning which improved the diagnostic process.

Around the same time, a substance known as tissue plasminogen activator was developed and this went into use during the mid-Nineties.

When administered, it works to break up clots (a process called thrombolysis) and has been a real game-changer.

But, critically, TPA needs to be given within four-and-a-half hours of the onset of symptoms. This has given rise to the “thrombolysis call” that sings out from the bleeps carried by doctors, summoning the stroke team to accident and emergency whenever a patient with stroke symptoms turns up.

More recently, another intervention to treat a stroke has been added to the arsenal.

Medical thrombectomy involves placing a catheter into the blood vessel in the groin and feeding it up into the carotid vessels and beyond to either suck out the clots or collect it using mesh.

All of this means we are better at treating strokes now than ever before but the time element should not be underestimated.

Effective treatment relies on timely presentation to a doctor and the highly successful FAST campaign has contributed to that. The take-home message is, don’t leave it or try and sleep it off as people sometimes do.

Transient ischaemic attacks can present with the exact same symptoms as a stroke, the only difference being the fact that the interruption of blood flow is temporary, meaning the symptoms resolve completely within 24 hours.

That is not a reason to wait for 24 hours however before seeking help.

Now, as promised, the risk factors. If you’ve read my previous articles, I suspect you’ll recognise these — smoking, obesity, alcohol, lack of exercise. These are all things you can change. If not, you are more prone to things like high blood pressure and diabetes, themselves risk factors for stroke.

It is worth mentioning the common heart condition known atrial fibrillation. This results in an irregularly irregular rhythm of the heart and the turbulent flow that ensues gives rise to an increased risk of clots being thrown off into the circulation that end up in the brain, causing a stroke.

For patients with this condition, the recommendation is normally to thin the blood with anticoagulant medications.

A mild stroke, or TIA, can be extremely disconcerting but more serious ones can be devastating.

A stroke is the leading cause of adult disability in the UK. It took Johnson eight months to learn how to walk again via a disciplined routine of physiotherapy.

For many, that doesn’t happen.

While there are now more treatments, as ever, prevention is the best medicine.