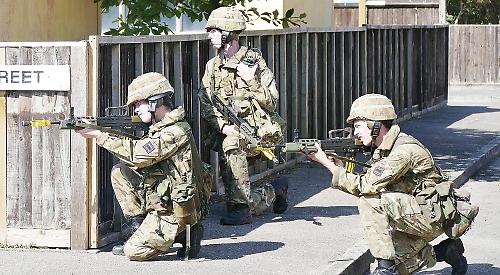 THE cadets have returned from their annual camp at St Martin’s Plain in Folkestone.

The 10-day camp consisted of military training, including shooting, fieldcraft and first aid among many other activities. The Henley detachment also has good reason to celebrate with the two senior cadets returning from the national cadet training centre after completing the master cadet course, the first Henley cadets to do so since 2012.

The detachment was awarded the Draper Bugle, which is awarded to the detachment in Oxfordshire that participates in the most activities. 2nd Lt Fearn said: “The past year has been great for the detachment. I’m incredibly proud of all the cadets in Henley as without them there would be no Henley detachment and we wouldn’t have achieved everything we have done this year.

“The start of our new year means that anyone moving into year 8 at school can now join our detachment. I eagerly await their arrival to continue growing Henley’s premiere cadet force.”

The Henley Army Cadet Force parades at the old Territorial Army centre in Friday Street on Wednesdays from 7pm to 9.30pm.

It is currently looking for new cadets and adult volunteers. Feel free to come along and experience something new.

For more information, call detachment commander 2nd Lt Thomas Fearn on 07500 504397 or email him at 3875fear@armymail.mod.uk