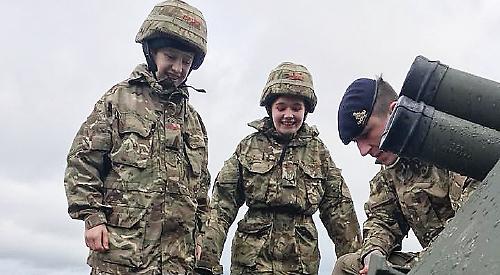 CADETS from the Henley detachment visited the Royal Engineers and Royal Artillery over the half-term holiday to gain on-the- ground experience of how the armed forces operate at a regimental level.

On Tuesday, February 13, which was cold and wet, they visited the Royal Artillery in Larkhill in Wiltshire.

The day started at a pace with a visit to the gun line to observe some live firing of the 105mm light gun.

The cadets had a chance to get up close and discover a little more about the equipment and the role of the Royal Artillery.

After a very welcome hot brew and range stew, it was a quick move to the target end. This time the cadets were able to observe (from a safe distance) the fall of shot and how the gunners locked on to their target for all the guns on the main mission.

Finally, it was back to camp to get hands-on with some of the other equipment in the gun park, including the AS90.

On Wednesday, February 14, the cadets went to Gibraltar Barracks in Camberley, Surrey, to see the Royal Engineers in action.

The visit started with an enthusiastic brief about the corps and the multitude of trades available within it.

After a quick move to the training area, the cadets were thrown into a mental and practical challenge.

With a limited range of equipment, they were set the task of clearing some distinctly muddy water. Four teams, one result — clear water!

This activity was closely followed by hands-on experience of operating plant such as cranes, grabs and drops lorries. Finally, the Royal Engineers demonstrated the use of pyrotechnics to produce simulations of air strikes and other weapon systems, an important element of the safe training for regular soldiers but for cadets simply awesome to see and hear.

The Henley army cadets parade at the Drill Hall in Friday Street every Wednesday from 7pm to 9.30pm.

They are currently looking for new cadets and adult volunteers. Feel free to come along and experience something new.