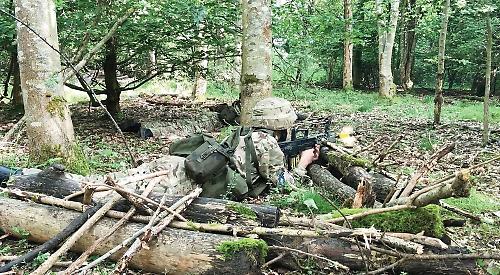 THIRTY-FIVE cadets from the Henley detachment undertook a weekend field exercise at Piddington, near Bicester.

They were tested on their skills and drills in the field over 48 hours, which meant they had to be self-sufficient and work as a team to undertake tasks and defend their “harbour” area.

The cadets were issued with weapons and full kit and received a detailed brief on the weekend’s missions before they set off to locate a safe harbour area.

Their first mission was to stalk towards an enemy position to create a range card — a detailed and important piece of reconnaissance used to build the battle picture.

Using these range cards, they were able to locate and flush out the enemy positions during the afternoon.

The evening and night involved sentry duties. The sentries had to ensure that the occupants were safe as they came under constant attack and were required to use their rifle training to fight back.

The next morning the cadets had to locate the final enemy and flush them out of Piddington training area.

Detachment commander Lt Thomas Fearn said he was extremely pleased with the cadets’ levels of tactics and commended them on their hard work and focus throughout the exercise.

Cadet Rebecca White said: “This was the first blank firing exercise we have done and it was so fun.”

The Henley army cadets parade at the Drill Hall in Friday Street every Wednesday from 7pm to 9.30pm and are currently looking for new cadets and adult volunteers. Feel free to come along and experience something new.