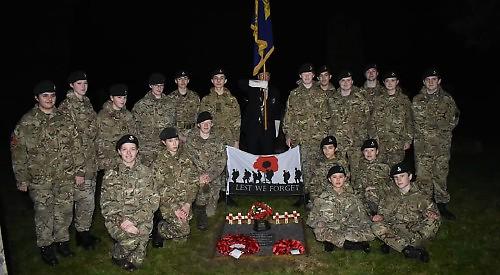 THE cadet force remembered fallen First World War soldier Alfred Barnes by refurbishing his grave on the 101st anniversary of his death.

The Henley detachment adopted the grave at Fair Mile cemetery in Henley in 2014 as Pte Barnes had no known relatives.

He was buried in an unmarked grave and forgotten for almost a century until the plot was located by historian Mike Willoughby, of the Lest We Forget
project.

The cadets refurbished the grave by installing a wooden border, slate chippings and flowers.

The Oxfordshire Army Cadet Force padre Mark Newman held a service of remembrance which was attended by 25 cadets from the Henley detachment and Lt Col Nick Launders, of the Peppard branch of the Royal British Legion, with the branch’s standard.

Corp Ashleigh Poolan, who assisted with organising the grave refurbishment, said: “We visit Alfred each year around remembrance Sunday but this year felt we wanted to do more to remember him and came up with the idea of making the grave more eye-catching.

“We are all very happy with the way it turned out.”

Lt Thomas Fearn, detachment commander, said: “I’m incredibly proud of the way the cadets organised this all by themselves — they showed maturity beyond their years.”

The Henley Army Cadet Force parades every Wednesday from 7pm to 9.30pm at the Drill Hall in Friday Street, Henley, and is currently looking for new cadets and adult volunteers to join them. Feel free to come along and experience something new.