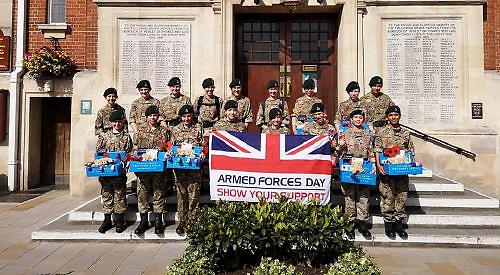 TOMORROW (Saturday), the Henley Army Cadets will be celebrating Armed Forces Day from the safety of their homes due to the coronavirus lockdown.

The day gives the public a chance to show their support to the men and women in the armed forces, from serving soldiers to veterans and other supporting members. Across the country, people from different communities and organisations gather to show their support and encouragement. By doing this, we can provide a much-valued morale boost for all those involved with the armed forces.

Each year, the Henley detachment of the Oxfordshire Army Cadet Force performs street collections in the area in aid of the Royal British Legion.

Colour Sergeant Ashleigh Poolan, the most senior Henley cadet, says: “Armed Forces Day is a chance for the whole country to celebrate the work of service personnel, reservists, veterans and many more, so please get involved and show your support.”

The Legion itself provides support for serving members of the Royal Navy, Army and Royal Air Force as well as for veterans and their families.

Whether it be for care and independent living, physical and mental wellbeing, financial and employment support, or even just guidance, the Legion can help with them all.

By donating, you are helping support those in need within the armed forces community.

You can join in by flying your own Armed Forces Day flag, bunting, hand-wavers or banners or show your support through social media and other platforms.

#SaluteOurForces is a simple way for anyone to show support to the armed forces for their hard work, dedication and efforts to keep us safe both in the UK and around the globe.

The Army Cadet Force is a national youth organisation for 12- to 18-year-olds, sponsored and supported by the Ministry of Defence.

To join the cadets or become an adult volunteer, email AUO Mel Haynes at 3360haynes@armymail.mod.uk