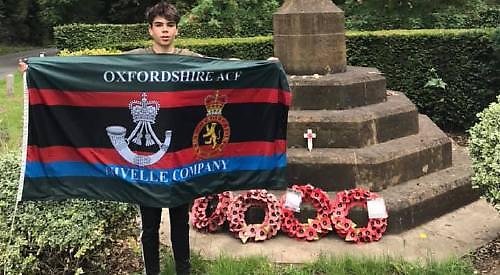 CADET sergeant Tom Fielder, from the Henley detachment, Oxfordshire Army Cadet Force, has raised more than £1,100 for the Royal British Legion by walking a marathon to local war graves.

The 16-year-old walked 26 miles — the equivalent distance of a marathon — to 51 servicemen’s graves and war memorials.

He held a small service at each grave, followed by a minute’s silence, and planted a poppy remembrance cross.

Tom walked to graves in Binfield, Highmoor, Sonning Common and Henley, among others.

He had chosen to raise money for the Legion as the Henley cadets were unable to organise their usual street collection this year due to the coronavirus pandemic.

His goal was to raise £500, which was achieved in a matter of days.

Tom continued to raise awareness of his challenge within the local community and gave a radio interview to the British Forces Broadcasting Service, helping him to achieve more than double his target.

John Green, chairman of the Henley and Peppard branch of the Legion, said: “Many congratulations, Tom. What an amazing achievement.”

“You should be very proud of yourself — a true ambassador of the company, battalion and the Army Cadet Force.”

The proceeds will provide support for members of the Royal Navy, British Army, Royal Air Force as well as veterans and their families, whether it be for care and independent living, physical and mental wellbeing, financial and employment support or just guidance.

Normally, the Henley Army Cadet Force parades at the Drill Hall in Friday Street every Wednesday from 7pm to 9.30pm. To join the cadets or become an adult volunteer, email AUO Mel Haynes at 3360haynes@armymail.mod.uk