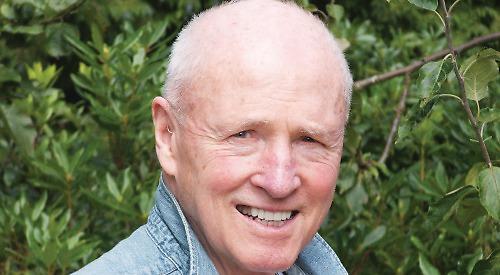 James Kelso is expecting to hear shortly whether his application has been successful, having had works accepted in previous years.

The first painting, The Shipping Forecast, was featured in the Henley Standard last August.

It takes as its subject the wreck of the ocean liner American Star, which came to rest off the west coast of Fuerteventura, one of the Canary Islands.

For many years the vessel was a popular tourist attraction, but the constant battering of the waves eventually took their toll and she broke in half, becoming visible only at low tide.

Mr Kelso’s second entry was painted rather closer to home.

The artist, who turns 83 this summer, said: “Terminus is the most recent of my Didcot Railway Centre series of images. It is possibly, or possibly not, the final manifestation in the sequence.”

Recalling his visit to the venue on “a glorious autumn afternoon” he said that at first “the adventure did not go well”.

“For a start it cost me 15 — one-five — great British pounds sterling to get in, including concession. I was steaming! So, as it happened, was Didcot. The stupendous entrance fee was because it was a ‘steam’ day and, worse, it was Thomas the Tank Engine Day.

“I was stampeded over and trampled upon by innumerable perambulators and buggies, many containing small persons who peered at me with beady eyes. Such was the mayhem, I fled to the top of the coaling shed rise, where I came upon the buffers you see in the painting. I skulked around there till sundown.”

This year’s summer exhibition runs from June 13 to August 20 at the Royal Academy of Arts, Burlington House, Picadilly.

Mr Kelso said: “The summer exhibition is a juried show, so it’s luck of the draw whether your work is accepted. The Royal Academy limit submissions to 12,000 at £25 each. Entry forms sell out almost instantly and they exhibit around 1,000 pieces in the event.”

Mr Kelso said he had started painting aged 20 as a “Sunday painter”, gradually morphing into a full-time career. He also worked in advertising in London as a freelance copywriter.

He said: “The man who started me painting was a sculptor. He said, ‘Remember, when you paint you’re not making art, you’re making furniture.’ To this day, I look for craft in artwork.

“My first painting was of Sydney Mews, SW3, where his studio was. After a while I said to him, ‘My wall doesn’t look like the wall at the end of the mews.’ He said, ‘That’s because you’ve a different number of bricks.’ I said, ‘I can’t see the number of bricks at this distance.’ He said, ‘Go count them.’ In a sense that’s what I’ve been doing ever since.”

Mr Kelso’s work can be viewed online at www.saatchiart.com and www.kelsopaintings.com