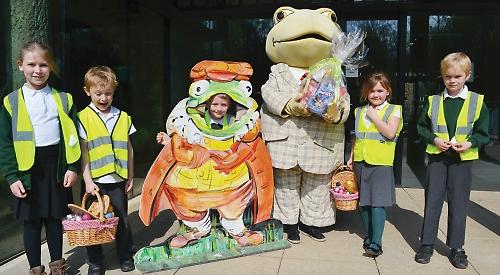 GOATS, rabbits and fluffy chicks will be taking over Henley’s River and Rowing Museum during the Easter holidays.

With schools breaking up today (Friday), most children are due back in the classroom on Tuesday, April 18 — the day after Easter Monday.

Starting from Monday (April 3), the museum in Mill Meadows will be running a host of family-friendly activities for all ages — including a daily Easter egg hunt around the galleries.

These will run until Friday, April 21, so there’s plenty of time to get into the Easter spirit.

Whether they’re aged two or 92, visitors are invited to follow the trail around the museum and collect their chocolate prize.

As well as the daily Easter egg hunt, the museum is holding a family fun day called Farmyard Frolics that is included free with regular admission.

A River and Rowing Museum spokesman said: “On Wednesday, April 12, visitors will be able to meet the amazing animals from Mill Cottage Farm Experience.

“Goats, rabbits and fluffy chicks will be frolicking outside in our Riverside Farmyard, while inside the museum families can get creative and enjoy Easter-themed arts and craft activities in the galleries.”

In the run-up to the Easter weekend itself, the museum is running two workshops for children.

Legendary Longboats takes children on a quest with Norseman Noggin the Nog before they build their own Viking longboats to take home. Aimed at children aged seven to 11, the session runs from 10.30am to 12.30pm on Monday, April 10. Admission is £8.50.

For younger visitors aged four to seven years, A Bottle for Bagpuss will include both story time and craft time as children can make a ship in a bottle and a Bagpuss mascot to wear.

The session runs from 10.30am to 12.30pm on Tuesday, April 11, and admission is £8.50. Included in the museum’s annual admission pass — details of which are given below — families can also enjoy a visit to the current family-friendly exhibition, “Clangers, Bagpuss & Co”, which is running until Sunday, June 4.

Featuring the original Bagpuss, Clangers and Ivor the Engine created by Oliver Postgate and Peter Firmin of Smallfilms, this interactive exhibition offers visitors the chance to have a go at creating their
own stop-frame animation.

Other galleries at the
museum include John
Piper: A Very British
Artist, dedicated to the
work of one of England’s
most influential yet
overlooked painters and
printmakers. Piper, who
died in 1992 aged 88, spent most of his working life at his farmhouse in Fawley Bottom, where he built a pottery and a studio large enough to create full-sized designs for his spectacular stained-glass windows.

On Tuesday (April 4), Piper will feature in a lecture at the museum by retired university academic Dr Graham Twemlow entitled “Art and Design in the Chilterns”.

The hour-long talk, which starts at 11.30am, will see Dr Twemlow explore how artists such as Piper were inspired by the local landscape. Tickets are £5.

Museum visitors can also tour the International Rowing Gallery. Packed with historic boats and beautiful blazers, this tells the story of the sport from the time of the ancient Greeks to the modern Olympics.

Meanwhile, the Henley Gallery includes an Iron Age hoard of gold coins and the beautiful steam launch, Eva, built in 1874.

And the River Gallery takes visitors on a journey through thousands of years of life along the majestic Thames, offering the chance to discover more about the various animals, birds and bugs that live in, on and by it.

Last but not least, the Wind in the Willows 3D exhibition brings Kenneth Grahame’s classic 1908 children’s book vividly to life, with visitors invited to join Ratty, Toad, Mole and Badger as they picnic by the river while the wicked weasels ransack Toad Hall.