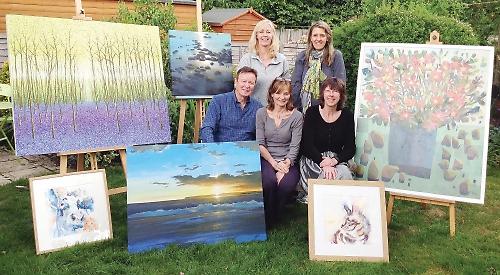 FIVE professional artists who used to exhibit at the former Art at Goring gallery are pooling their talents this weekend for a special show at the nearby village hall.

“Artists at Goring” is the brainchild of Howard Birchmore, Liz Chaderton, Este MacLeod, Sarah Pye and Janet Richardson, all of whom live and work in the Thames Valley.

The exhibition opens tomorrow (Saturday) and runs until Monday. Opening hours on the three days are 10am to 8pm (Saturday), 10am to 6pm (Sunday), and 10am to 5pm (bank holiday Monday).

As Sarah Pye explains, the inspiration for the show came from the artists’ positive experience of having their work on show in the village previously. She said: “There was a lovely gallery here called Art at Goring and very sadly about 18 months ago they closed.

“And quite a few of us artists — it was a very good area for us, basically — and we just thought we would have an ‘Artists at Goring’ exhibition.”

Sarah added that Sarah Whittaker, who previously ran Art at Goring, had given the show her blessing.

The five artists are hiring Goring village hall but have also announced that 10 per cent of all sales will be donated to the hall’s restoration fund.

“It’s one of those things where you’re doing a local event and it’s nice to put a little back in if you can,” says Sarah. “Obviously, nobody might sell anything!

“But on the other hand a couple of the artists are quite well known for their work around the area and they might do very well, in which case the hall will hopefully do well as well.”

Sarah, who is well known in Henley for her long involvement in the town’s popular annual arts trail, added: “The locals here loved Art at Goring and it had lots of things in it — not just paintings, it had lovely jewellery.”

In keeping with that tradition, one of the artists exhibiting this weekend is Janet Richardson, who has been designing and making jewellery for more than 35 years.

Landscape artist Howard Birchmore began drawing at the age of three, started painting with oils when he was 12, and completed his first commission when he was only 15.

Fellow painter Liz Chaderton says she tries to capture the essence of her varied subjects rather than the detail, believing that what is left out is just as important as what is put in.

Este MacLeod is a full-time painter with a background in textile design. She also has a bachelor’s degree in ceramics and glass and a master’s degree in jewellery design.

For her part, Sarah paints in a bold contemporary impressionist style, interpreting nature loosely and intuitively to reflect light and life.

For more information on the show, including artist biographies and links to their individual websites, visit www.artistsatgoring.co.uk