Painter's 50 portraits add up to a momentous year 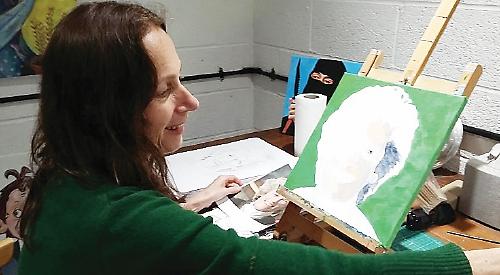 AN artist from Caversham is preparing to unveil the fruits of a year’s work at Henley’s Old Fire Station Gallery.

Next Thursday (June 8), as the country goes to the polls to decide who will form the next government, Sarah Seymour will be looking back on a truly momentous 12 months — in politics and more generally.

Her exhibition, The Fifty Faces, features portraits of 50 significant figures from the past year — drawn both from the worlds of politics, entertainment and the media and from the local area.

The artist has also sought to include personal friends and members of her family in the show, which raises questions about who and what is truly significant in our lives.

Now 51, it was as she approached her 50th birthday last year that Sarah found herself asking herself these and related questions.

“I have always liked doing portraits and thought it would be a good way of extending my skills.

“Choosing what to do was interesting. I asked a lot of people who they thought I should include and developed a few ground rules as I went along.”

These “ground rules” included having an equal balance of men and women in the show.

When it came to choosing the women in particular, Sarah said it was important to her that they be “significant for their contribution, not for being a victim or for who they were married to, or for their looks”.

Another basic rule was that each of the people pictured should have been alive for at least part of the year.

Adds Sarah: “I broke one of these rules, but the reasons why are explained in the exhibition.”

While working on the project Sarah, who is active on social media and has her own website, wrote a blog keeping a record of her progress.

Starting in March last year, having celebrated her birthday on the first of the month, the first face she chose to paint — working in acrylic on canvas — was the German chancellor Angela Merkel.

“I read somewhere that Angela always wears the same cut and colour suits to discourage press commentary on her appearance,” wrote Sarah shortly afterwards. “Often her face appears serious but occasionally she breaks into a warm, unaffected smile.”

Closer to home, the early stages of the Fifty Faces project coincided with the run-up to the EU referendum on June 23.

Says Sarah: “It’s been a really exciting year politically and painting the portraits made it even more significant to me.

“For example, I was painting Boris while the media were trying to guess if he would vote ‘in’ or ‘out’.

“I painted Trump and Hillary while they were vilifying each other in the presidential race and Theresa May when she was competing with Andrea Leadsom. The day after I finished painting her I was sitting at Heathrow waiting for a flight to Munich when the news came through that Leadsom had pulled out — so I had just painted the prime minister!”

However, as anyone who follows politics will appreciate, it is not unusual for one’s expectations to be overtaken by events. In this case, a visit to the hair salon.

“I must confess to a gnashing of teeth when I realised too late that I had portrayed Theresa May with her old haircut and not her newer, shorter one,” wrote Sarah.

“Of course, the political turbulence at home was far from over as more fighting broke out — this time amid the Labour leadership.

“This time I painted Jeremy Corbyn quickly, thinking that if I took too long Labour, too, might have updated its figurehead. But no, he’s still hanging in there.”

She added: “Now we are about to have a snap election the political fever has gripped my friends too and one of them has already bought the picture of Corbyn, hoping she will find out during the course of the exhibition that she has bought the next prime minister! I have never been so excited by politics in my life!”

Sarah, who in addition to her work as a painter is the director of music at St Margaret’s Church, Harpsden, has also included some familiar Henley faces in her show — including former mayor Liz Hodgkin and Nicola Taylor of Lawlor’s the Bakers.

Elsewhere, while not wanting to give any indication of political bias, Sarah says she thought US president Donald Trump “the ideal person” to be number 13 on her list of 50 faces.

The exhibition at the gallery in Upper Market Place opens at 10am on Thursday. Daily opening times are 10am to 4pm — with the exception of 2pm to 5pm on the Sunday — and the show runs until Tuesday, June 13.

Entry is free and the paintings will be sold by silent auction, starting at £50. For more information, visit www.sarahseymourart.co.uk