Sky winners are on a high at gallery 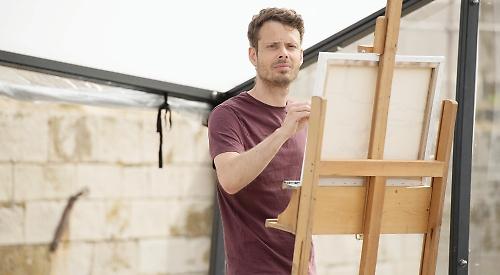 WALK past the Bohun Gallery’s windows this summer and you might spot a swarm of fluttering butterflies inside.

Sir Peter Blake’s butterflies, to be precise. His artwork is a lenticular — a moving image made up of thousands of slivers of photographs that together create a 3D effect.

This is just one of the standout pieces on display as part of the gallery’s new exhibition, Artists of Fame and Promise, which runs until September 2.

The gallery has found success with this format before — the idea being to invite carefully selected emerging artists to exhibit their work alongside that of some of its more established artists and sculptors.

Viewed in this light, Blake’s butterflies can be seen as a metaphor for the show as a whole.

“Fame and promise” exhibitions are an art world tradition that date back to the early Fifties, when London’s Leicester Square Gallery first pioneered the concept.

In doing so it helped launch the careers of artists such as Jacob Epstein, David Bomberg and Christopher Nevinson.

Astute-eyed visitors to the Bohun Gallery’s own early “fame and promise” exhibitions of the Nineties could have bought work by now-household names such as John Piper, Mary Fedden and Elisabeth Frink.

Each of whom are included in the gallery’s current show, which features 20 well-known names alongside handpicked “artists to watch” Nerine Tassie and Richard Allen, the winners of the coveted Sky Landscape Artist of the Year competition in 2015 and 2016 respectively.

“It’s an opportunity to promote artists that we see as artists of the future,” says gallery manager Katie Newman.

“We always have our eyes open to new artists, and our established artists sometimes suggest younger names. We decided to hold this show again as we saw these particularly exciting names and wanted to place them with some of the biggest names in art.”

Bohun Gallery director Patricia Jordan-Evans even travelled to a tiny fishing village in Scotland to view Nerine Tassie’s work at her remote studio. Tassie’s depictions of her local Scottish landscape are made with layers of dark colour spliced with flashes of metallic gold and bronze that create a surprising sense of light in these brooding, atmospheric paintings.

The landscape works by Bournemouth-based Richard Allen include his Postcards (Hardy Country) which won him a place on the Bake Off-style Sky Arts show that sees artists compete across a range of landscape challenges.

A former illustrator, Allen has been painting in earnest for the past five years.

“My way of working is gestural, impasto with a conceptual element,” he says.

His striking waterfall painting Aberdulais IV uses broad, thick strokes of oil that give a visceral sense of the rush of water.

“There are lots of twee galleries out there but Pat has very good judgement,” he says.

“It’s great company to keep with artists like Maggi Hambling. The exhibition has been a good testing ground and the response to the work has been heartening and very encouraging.”

Artists of Fame and Promise places these new works alongside pieces such as a rare sculpture by Maggi Hambling and paintings by John Piper — international names that Katie says help pull in buyers in from London and further afield.

Landscapes are a particular highlight. Matthew Draper’s atmospheric cityscapes are made entirely in pastel, making a traditional technique feel modern, while Colin Bishop builds up layer upon layer of thick oils to create abstract landscapes that are temptingly tactile.

A final surprise is the tiny hidden sculpture garden at the rear, where works by Clare Bigger and Martin Cook are perfectly at home in the sunshine, among lush greenery.

“The gallery has grown stronger and stronger as we have helped establish and build artists’ names,” she adds. “The most important thing is maintaining quality and variety — then people will always want to come.”

Artists of Fame and Promise runs until Saturday, September 2, at the gallery in Reading Road. Opening hours are Tuesdays to Saturdays from 10am to 5pm.

For more information, including a preview of selected works, visit www.bohungallery.co.uk