'Accidental' sculptor has a keen sense of theatre 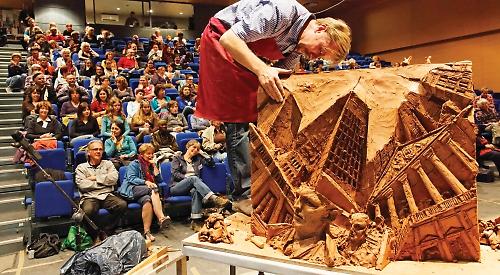 EXHIBITING at next week’s Henley Festival is the nearest the sculptor Paul Day will come to taking a holiday this year.

The artist, who has lived in France since the early Nineties, is best known for his public sculptures — including such iconic installations as the Battle of Britain monument on London’s Victoria Embankment and The Meeting Place at St Pancras Station.

In March he was back in the capital for the unveiling of his Iraq and Afghanistan Wars Memorial in Victoria Embankment Gardens by the Queen and the Duke of Edinburgh.

On the day we spoke, the 50-year-old had been busy working on designs for two more large-scale monument competitions. He was also juggling preparations for a big show in his home town, near Dijon, and a coin project with the Royal Mint.

“I don’t have holidays,” he says, “I just have work trips that sometimes happen to be nice places.”

And Henley, it seems, more than comes into that category.

From Wednesday (July 5), when the five-day festival gets under way, Paul and his works will be sharing the riverside sculpture garden with some of the UK’s most exciting contemporary visual artists.

On display will be large-scale sculptures, immersive outdoor light installations and a string of pop-up galleries for festivalgoers to enjoy.

For Paul, the experience of coming to Henley — and spending time on the festival site — is one to savour.

“I’m not the successful artist who can afford to pay everybody else to do everything, so I’m going to be driving my van and coming with my wife and the sculptures in the back.

“We’ll help set up and then camp somewhere or stay in a little B&B and talk to people, you know? We’ll be there to enjoy the festival, hopefully, but also to meet with the public. People who are interested.

“I’m delighted in a way — it’s going to be like a mini-break, doing a show at Henley. But also going back to the UK because my children are both in the UK — my daughter is at university and my son is working — so I hope we might be able to see them a little bit. We’ve got some friends that we haven’t seen for a very long time as well, so I’m really looking forward to it.”

He has visited Henley before, but only briefly. “When I first went to see Stanley Spencer’s chapel in Cookham we spent an afternoon in Henley and then the second time was to go and meet [Henley Festival artistic director] Stewart Collins.”

With Paul being known for his large-scale public sculptures, will the work he is showing at Henley — which like all the works on show will be available to purchase — have a slightly different emphasis?

“Well, the thing is, I’m a bit of a sort of an atypical sculptor in the sense that I started out as a painter — or at least that’s what I thought I was going to be — and ended up doing sculpture at art school by default. I always had in my mind the idea that I would make pictures, so sculpture was a bit of an accident.

“I wanted to go to Cheltenham but they refused to have me for painting so I went back and asked them and they had a place on the sculpture course. And I said, ‘Well, can I do sculpture instead?’ And I somehow managed to get in to do that.”

Without getting too formal, the style for which Paul is renowned is relief sculpture, which can be thought of as a drawing in sculptural form. A further distinction can be made between low reliefs, such as you might find on a coin, and high reliefs, which are characterised by greater depth.

In Paul’s case, he says, his reliefs “started low and got more and more deep as time went on”.

“Relief sculpture is what I’ve mainly been doing over the past 25 years. And it’s only on the odd occasion that I’ve started to do sculpture in the round. Obviously with projects like the Iran-Afghanistan memorial and the Battle of Britain monument they are basically relief-based with some sculpture attached.

“Then there was the St Pancras commission where there was a sculpture on top and then a big relief around the base. So in a sense I’m new to sculpture but I’ve been making reliefs for a very long time.

“Most of my work is wall-mounted reliefs that require, if you like, a setting indoors or outdoors but mainly indoors where I light them and they become almost like miniature theatres in a way.

“In a sense, until I’ve had a few more years where I do more of these pieces that are very much considered as sculpture and not as just reliefs, I can’t really define what I do as sculpture because it’s all so relief-based.”

If it’s slightly startling to encounter such a successful sculptor who doesn’t yet consider himself a “sculptor proper”, it’s abundantly clear that here is an artist who has zero interest in standing still.

“I’d really like to spend more time dealing with form and volume in my work as opposed to being very much preoccupied with the image of a relief — even if it’s a very high relief where there is of course form and roundness. I just wanted to expand my repertoire, really. It’s about reinvention. It’s about stretching myself to go out of my comfort zone and to learn things, you know?”

As chance would have it, his development as an artist to date has been charted in a new coffee table book of his work. Titled Paul Day, copies will be on sale throughout the festival and there are also plans for the artist to hold a book signing.