Inspiration is never far to seek for Watlington artist 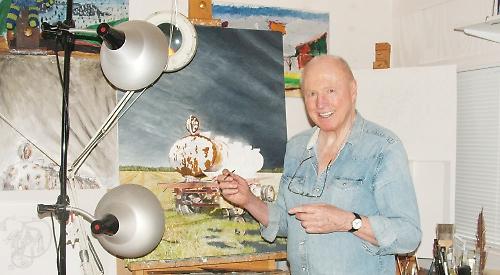 JAMES Kelso’s Watlington house is his gallery — it seems every wall space is put to use.

Some 50 paintings that span 40 years of the artist’s work are carefully grouped. They look so much at home that it must be a poignant moment to see one sell.

Each piece tells a story of his life — the urban, industrial scenes from his time as a copywriter in London, abandoned barns and big skies painted after a move to Oxfordshire, and the inevitable changing face of self-portraits.

A selection of Mr Kelso’s recent landscape works are on display at Watlington Library until Saturday, August 5, just down the road from his home of nearly three years.

The centrepiece of the mini-exhibition, Gran Via, Watlington is a huge acrylic work in which you can practically feel the sunlight bouncing off the brick houses lining the High Street where the library itself stands.

Having previously lived in Christmas Common for many years, this was the first painting Mr Kelso completed after moving to Watlington in 2014.

Library manager Libby Willis said: “It’s quite striking. A little detail on that one is that there’s the shadow of a red kite — just on a brick wall. That’s such a lovely touch because we’re renowned in this area for all the kites. Nothing obvious, just a shadow of it, which was very clever.”

Equally striking is the smaller Dune — all hot white sand and long shadows — picked up by the Royal Academy in 2011.

Another local scene, The Byre depicts one of Mr Kelso’s regular painting haunts, the Stonor Valley.

Meanwhile, he looks to Scandinavia and the influence of his Swedish wife for Dala Horses — two vibrant red wooden horses, a folkloric symbol of goodwill in Sweden, set against a snowy landscape.

A self-taught artist, it is only in the last few years that Mr Kelso has been able to dedicate time to focus on painting, having spent much of his working life in the advertising industry.

In previous homes he would balance paints on his bed and work on a Sunday morning, but now he disappears for the whole day to his idyllic garden studio, working full-time as a painter.

“I’ve never felt more content,” he says, “and neither has my wife!”

Inside his studio, among the propped-up pictures, easels, tubes of paints and other paraphernalia, you get a real sense of the months of work put into each painting.

First there are the “roughs” — graphite sketches, sometimes done in situ. Then it’s back to the studio for preparatory paintings and meticulous work creating the final piece — his current medium being oil, but sometimes acrylic, watercolour and graphite too. “I’m a skill fan, though I’m aware skill without imagination is not enough,” he explains.

Mr Kelso’s attitude is defiantly young at heart — he’s as much at home on his Mac Pro as he is painstakingly hand-preparing and rubbing down his painting boards.

“Canvas has no intrinsic merit, it was only introduced for its portability — it was the Amazon of its time,” he notes.

His works have a youthful energy too. The most successful avoid traditional tropes, instead zoning in on the off-kilter, the neglected. Realism, but with a twist.

“My work is representational,” he insists. “It’s not progressive or challenging. Indeed, I often wonder what modern, challenging art is challenging these days.”

“I paint whatever interests me at the moment,” Mr Kelso says. Currently a huge rusting tanker in a field nearby. Perhaps not the most beautiful of objects, but he gives it a strikingly dramatic quality — with a huge brooding sky behind that contrasts with the lush field and the vivid colours of rusty metal.

“I’m interested in infrastructure,” he says of his sometimes surprising subjects — electricity cables high above a field, a bridge over the M4 and his London scenes that have a contemporary feel despite being 40 years old.

“When I started painting in London, I painted outdoors and the only places I could work undisturbed were industrial canal banks, railway sidings and warehouses.”

These works were the first to be selected for the Royal Academy Summer Exhibition — where he continues to exhibit.

“I always like to have a bit of a minor key knocking about, a bit of a dark side,” he says.

But there’s a sense of fun, too. Look closely to find Mr Kelso’s red spotted painting hanky that makes a subtle appearance in many of his works — reworked as a label on a denim shirt or hanging off a window box in a street scene.

The artist is keen to open up his home and studio, gallery-style, to those interested in his work.

“I want to walk ’em round and talk ’em round,” he jokes. “My studio door is always open to discuss projects. You can borrow a painting to hang in your home to see if you like it.”

“I sell through galleries but more and more I find I’m selling direct to and being commissioned by an exclusive list of private buyers,” he says. “These are clients who are confident in their own taste and who don’t need the reassurance of a gallery to justify buying art.”