Art and literature on the menu at 'Profumo' estate 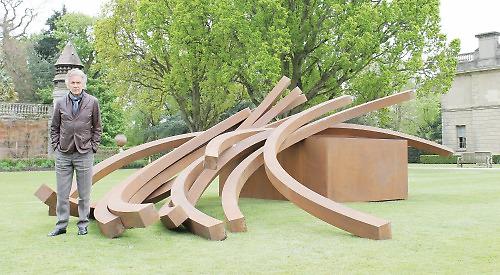 AN artist hailed as the greatest living French sculptor is showing 10 of his large-scale works in the grounds of Cliveden until mid-October.

Bernar Venet is an internationally acclaimed conceptual artist who has exhibited across the globe.

But the installation of a series of steel sculptures up to nine metres high in the gardens of Cliveden marks the first outdoor exhibition of his work in the UK since 1976.

It has also seen the unveiling of a brand new piece for 2017, called Seven Leaning Straight Lines.

A spokesman for the National Trust, which owns Cliveden, said: “Venet has an insatiable curiosity and desire to push both his own limits and the frontiers of art.

“Mathematical investigations of chance and chaos provide the starting point for his distinctive outdoor steel sculptures that explore variations on the simple line.

“Venet’s large-scale sculptures are afforded the space they need to be appreciated in Cliveden’s designed landscape.

“There’s a dynamic tension between the angular geometry of the formal gardens and the soaring arcs and bars of the solid steel structures.”

Running alongside the contemporary art exhibition is “The Shock of the New” — a short self-led tour exploring some of Cliveden’s most controversial sculptures.

Cliveden curator Oonagh Kennedy said: “Cliveden’s owners have all been great patrons of the arts. All have embraced the new in the pursuit of edifying the setting of Cliveden.

“From the Duke of Buckingham’s theatrical setting for his mansion house and the Duchess of Sutherland’s pioneering carpet bedding, to William Waldorf Astor’s extravagant Waldo Story sculpture, Cliveden’s owners have viewed themselves at the forefront of contemporary taste. They operated at an international level and we are continuing this work.”

Venet’s works will remain on show until mid-October, when Cliveden is hosting its first ever literary festival.

Robert Harris, Tina Brown, Ian McEwan, Antonia Fraser, Sebastian Faulks and Michael Gove are among the stars of literature, politics and history who will be appearing over the weekend of October 14 and 15.

The festival is being chaired by Natalie Livingstone, the author of The Mistresses of Cliveden, who said: “While researching my book I discovered that Cliveden has always been a magnet for truly great writers — from Jonathan Swift to Tennyson, JM Barrie to HG Wells and George Bernard Shaw to Rudyard Kipling. The Cliveden Literary Festival will revive this tradition by gathering an impressive array of authors of today in a place that resonates with history and literature.”

For more information, including the full programme of events, visit www.clivedenliteraryfestival.org