Garden painter's work is sure to grow on you 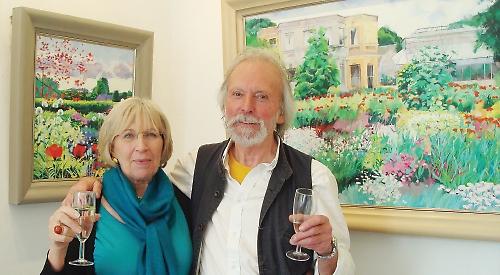 THE lush, vibrant paintings of the artist Louis Turpin have become something of an institution at the Bohun Gallery, which has held no less than 12 exhibitions of his work over the past 30 years.

The artist’s new show, Garden Journeys — which is running from tomorrow (Saturday) until the end of the month — is a must for Turpin fans and garden enthusiasts alike.

It brings together 35 never before seen works depicting gardens across the British Isles, all conceived especially for the Bohun.

“My subjects have changed over time but often come back to the garden as a theme,” says Turpin.

“With this exhibition, it’s looking at it in a broader way. I wanted to make a journey around the country — visiting some gardens that I’ve done before and some new ones.

“I went from the tip of Cornwall up to Edinburgh. The effect of the location on the planting is incredible — like the Scottish blue poppies that you wouldn’t see in Cornwall.”

Visiting the show is akin to stepping into a botanical world of colour and foliage and you are guaranteed to leave a few notches more upbeat than you entered (not to mention with a new-found urge to plant your garden).

Every oil on canvas — whether large and breathtaking at 24 by 24 inches or the smaller works — have their own presence, using broad brushstrokes and a vivid palette to create a tapestry effect.

“Colour is my subject, my interest,” says Turpin of this dominant theme, which he has developed since he began painting 50 years ago.

“In the early days painting interiors, I was drawn to the colour in carpets, curtains or textiles. Colour is part of my process.”

An intense palette weaves its way through each piece — in the rich
subtropical lilacs and lime greens of Tremenheere in Cornwall, the sunny spring shades of Towards St Michael’s Mount, and the delicate pastels of a wildflower meadow, right through to the darker, more brooding Dixter Frost.

Nevertheless, Turpin avoids a cacophony of colour by grounding his paintings with the calming greys and greens of a wall or foliage and creating a sense of lightness in a hazy blue sky.

There are even a couple of quieter monochrome works in pen and ink and two “Jack in the box” sculptures that are unique to the Bohun.

Turpin has worked exclusively on this show for the last two years — visiting gardens across the British Isles with the aim of articulating the achievements of some of the greatest garden designers of our time.

“It might be a garden I’ve read about — people suggest them to me,” he says.

Others he returns to time and again. Great Dixter, close to his studio in East Sussex, is a favourite subject.

“The gardener there, Fergus Garrett, puts an energy into his garden — it’s thicker and deeper and taller every year. He has grown wild flowers in the orchard. Others have more formality to them, but they all have different qualities.”

Turpin has also been drawn to Henley gardens over the years — painting private gardens as well as Greys Court.

“We live in a country that’s hugely welcoming to gardens,” he says. “The climate and seasons give you everything, so gardens become great expressions of the horticultural intent of the gardeners.”

This diversity underpins the show — from the tightly-knit planting schemes of medicinal plants at the Edinburgh Physic Gardens to the rococo escapism of Painswick Gardens in Stroud and the natural woodlands of Hole Park in Kent.

The exhibition offers a chance to see Turpin’s depiction of gardens by the designer Rosemary Veerey OBE, which are not usually open to the public.

The artist also turns his gaze towards less celebrated gardens — an allotment and a kitchen garden taking centre stage.

“He’s not just interested in the grand gardens,” adds Newman. “It’s refreshing to see that the more mundane, everyday can be just as bright and beautiful.”

This recent subject also reflects a personal interest of Turpin’s.

“We grow vegetables and it’s always been something I’ve enjoyed — it’s interesting for me to see gardening on a less grand scale.

“The allotment movement has grown hugely recently. Now allotments are full and each plot reflects the character of the grower — some are neat and formal and some are more haphazard... I find that fascinating.”

Despite a long career, Turpin’s paintings have a refreshing, modern appeal and he never stops evolving his style.

“You have to keep your questioning alive and the way I’ve approached the work, there are moments when they become looser — it’s intuitive.”

Turpin’s reputation has only grown with time — the artist now attracts collectors from all over the country and further afield, according to Newman.

“We’ve had such a strong response and his shows have created such a following,” she says. “Every year it gets better and better and has built up to a national interest in his work.”

The Bohun has now become the main hub for Turpin’s work.

Gallery director Patricia Jordan Evans explains how the relationship began in 1986, when Turpin decided to look for a galley to represent him.

“He drove the length of the country and, I am delighted to say, having heard of Bohun Gallery’s reputation, he called in to see me. We hit it off immediately.

“I was thrilled with the originality and quality of his work and asked him to produce some paintings for our next mixed show. We have had a very long and happy relationship.”

Here’s to many more years to come.

• Garden Journeys runs until Saturday, September 30, at the gallery in Reading Road. Opening hours are Tuesdays to Saturdays from 10am to 5pm. For more information, including a preview of the works on show, visit www.bohungallery.co.uk. Works are priced from £1,000 to £5,000. For individual prices and availability, call (01491) 576228.