Young artists in running to have work at national gallery 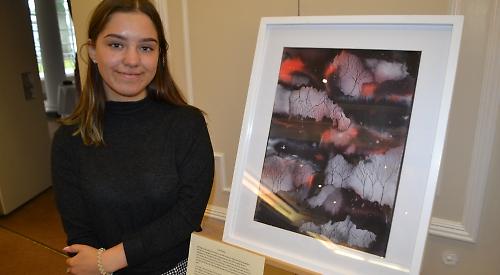 ARTWORK created by students at The Henley College and the Piggott School in Wargrave is in the running to be exhibited in a national gallery.

Members of the society visited summer exhibitions at the two schools to view the work of sixth form students before hosting a prize-giving ceremony at Phyllis Court Club in Henley on Thursday last week.

The artwork will now be judged along with hundreds of others from around the country, with several then selected to be displayed at the Mall gallery in March next year.

The five students attended with their artwork at the private members club in Phyllis Court Drive, where they were presented with a cheque for £50 and a certificate from Lady Camoys, president of the Arts Society Henley.

They included Sophie Chapman, 18, of Twyford, who goes to the Piggott School and had two portraits chosen by the society. One was of a woman in a headscarf and the other was a woman applying mascara.

Sophie said: “I focused on portraits for my A-levels and found it interesting how powerful they can be. One is based around the refugee crisis and the other is about how women present themselves. I knew which models I was going to use straight away, I like people with interesting features.”

Fellow Piggott student Tasia Hancock, 18, of Marmion Road, Henley, painted a row of five insects, starting with the foreground and then applying the copper background over the top before flipping the image.

She said: “It’s painted in reverse. I chose bugs because they are quite easy to make look realistic, with a face it’s easier to see what’s wrong. It’s really good to be chosen, I’ve never had my work exhibited before.”

Dozens of guests including the parents of the students attended the prize-giving, where they were able to view the artwork.

Lady Camoys said: “I’m very impressed and I think they have all got tremendous talent. I hope they go on in their lives painting, as well as any other jobs they may have. Being able to keep that talent is important.”

Liz Jarvis, the Arts Society Henley’s young arts representative, added: “The prize-giving was a very happy occasion and the students were delighted to receive their awards. The Arts Society Henley members were treated to an exhibition of the artworks which was greatly appreciated and they were fascinated by the background inspiration and creativity of these works.”