Photographer is gaining some exposure at library 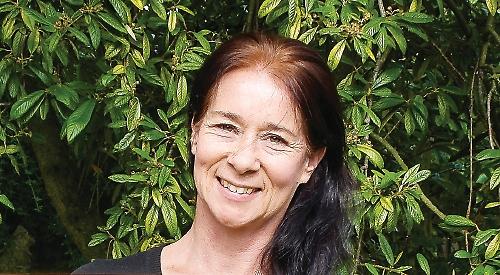 AN award-winning photographer who lives half the year in Sonning Common and the other half in Hong Kong is staging an exhibition of her work at Watlington Library.

Ruth E Morris’s show “Hong Kong Landscapes” opened on Monday at the High Street venue and will run until Christmas.

It follows on from an exhibition of photographs of Watlington itself that she mounted at the same time last year at the invitation of library manager Libby Willis.

Following the donation of a display area by the Friends of Watlington Library, the venue has hosted work by a range of visual artists.

Some, like Jim Kelso, who exhibited a selection of his paintings during the summer, are based just down the road, while others hail from slightly further afield.

“My connection with Watlington is that I went to school with Libby,” says Ruth, who recently turned 52.

“We go way back. We went to Highdown School in Emmer Green together and we’ve kept in touch.

“Last year, I can’t remember how the exhibition came about, but she said that lots of people paint Watlington but nobody’s photographed it. So I said, ‘Right, I’ll do an exhibition of photographs!’

“It’s difficult to photograph Watlington because you have that central town hall. It’s difficult to get landscape shots unless you go at three o’clock in the morning. So I thought, okay, I’ll get detail.

“I had a wander round and just took lots of detail and a few landscapes. Watlington is gorgeous. Really, really nice. So it was lovely to go round and have a real look, you know? Because I think being a photographer enables you to — or makes you — observe.”

Ruth’s love of South Oxfordshire also showed through on a recent visit to Henley. After visiting the Standard’s offices in Station Road, she set off for Marsh Lock armed with her trusty Nikon.

One of the photographs she took that day recently won a bronze award in the open category from the UK’s Guild of Photographers — of which Ruth became a member last year.

“When I joined I had to submit 21 photographs and an article about the photographs to become a qualified member. So I did that about a year ago to get accepted. They’re a tough bunch, and they’re so talented, so to be accepted is brilliant.”

Ruth’s hard work in qualifying for the Guild of Photographers has understandably fed through into her Watlington Library exhibition.

“I’m a landscape photographer, so they’re photos that show the sort of old and new Hong Kong. Because Hong Kong is changing as China takes over. It’s a 50-year handover period. They’ve had 20 years now and they’ve still another 30 years before China takes over completely.

“That process of change means that the harbour’s changing, the landscape’s changing. There are more residential properties being built because mainland China’s moving into Hong Kong. Because obviously the quality of life is better in Hong Kong than in mainland China.”

Ruth is married to Tim, who works as a recruiter in construction in Hong Kong, while she teaches art and design technology in addition to her work as a freelance photographer.

“The photography is the biggest side to the art teaching that I do — I do quite a lot of photography in the schools that I teach in. Yearbook photos and things like that. But we’re moving back to the UK next year, so I’ve been trying to document as much as I can of Hong Kong.”

Visitors to Watlington Library can expect to see around 10 A3-size prints chronicling a range of subjects.

“They’re landscapes,” says Ruth. “Mainly around Victoria Harbour because that’s the bit that’s changing and developing most. It’s also near one of the outlying islands of Hong Kong, which development hasn’t touched yet — but it will, I think, as the fishing industry declines.”

Ruth’s autumn 2016 exhibition was the first time she had shown her work in Watlington, but its success with visitors ensured she got invited back.

“I was thinking, what can I do this year, and Libby mentioned Hong Kong. I’ve won quite a few Guild of Photographers awards for my Hong Kong photographs, so I thought, well, I’ll exhibit some of those.

“There’s bound to be people in Watlington who’ve visited Hong Kong and might recognise some of those scenes — I mean, it’s amazing how many people you know who have contact with Hong Kong, have been to Hong Kong or knows someone who used to live in Hong Kong, because there’s that close connection with Britain.

“It’s very, very different from the UK but there are still red phone boxes that you can find and they drive on the same side as the UK and there’s lots of things still — even though it’s becoming more and more Chinese — there are lots of little things where you think ‘Ah, that’s still here.’”

Ruth, who was given her first camera aged 10, recalls: “I loved it. Carried it around everywhere with me. I can remember taking my first ‘proper’ photographs in Padstow, Cornwall. Since then, photography — particularly landscape photography — has been my passion.”

More recently, it seems her trip to Marsh Lock might have provided her with inspiration for a future show.

“I’m thinking, well, I’ve done Hong Kong, I’ve done Watlington, how about waterways around Oxfordshire or the Oxfordshire countryside? Something different but still interesting to people.”

⚫ • “Hong Kong Landscapes” by Ruth E Morris is showing at Watlington Library until Christmas. The library’s opening times can be found online at www.oxfordshire.gov.uk/cms.content/ watlington-library