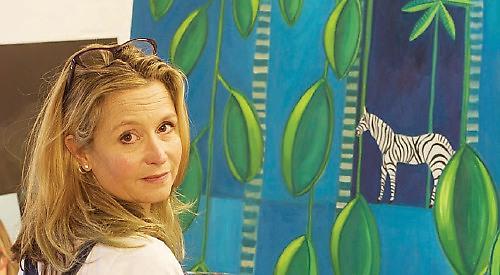 GENEVIEVE French is grinning from ear to ear. Surrounded by her colour-pop paintings, she looks like the cat that got the cream.

It’s only two years since graduating from the Heatherley School of Fine Art in Chelsea and she’s already been shortlisted for Artists & Illustrators magazine’s artist of the year award, collaborated with fashion designer Paul Smith and is taking part in two exhibitions this month.

Her paintings, like her disposition, are radiant works of colour and exuberance. The drab grey-box exterior of her studio gives way to a joyful cornucopia inside.

There are paintings-in-process, a wooden palette thick with oils, art books piled high, endless pots and brushes, and collected items such as a bird’s skull wearing sunglasses and a feather headdress. Even the kitchen roll is neon pink.

French began painting seriously when her children were nearly grown up, some five years ago, but creativity has always been embedded in her life.

“I can’t not create — I get very grumpy when I’m not creating,” she says.

Travelling extensively as a child, from Australia to the south of France, French grew up in the London arts scene. Her curator mother had her own gallery and her father was at the Chelsea College of Art.

Now it’s her turn to take on the gallerist role, curating her first solo show at the Hepsibah Gallery in West London, where she is exhibiting her recent prints and originals, ranging from £70 to £1,500. The show opened yesterday (Thursday) and runs till tomorrow (Saturday).

Closer to home, her works have been selected for the Alex Hammersley Art Winter Exhibition — a group show being held at Magpie Cottage in Christmas Common from Friday, November 24, to Tuesday, November 28 (not including the Sunday). Opening hours are 11am to 5pm or by appointment. For more information, visit www.alexh-art.com

French’s work has a sense of freedom that belies a very strict training — two intensive years at the historic Heatherley school where she honed her skills in drawing and portraiture.

“You have to know the rules in order to break the rules,” she notes.

Once enrolled, she was quickly selected to be tutored by the renowned artist Maggi Hambling CBE, whose works are regularly shown at the Bohun Gallery in Reading Road, Henley.

Having spent more than a year under Hambling’s tutelage, French has expanded her repertoire to include life painting in oils.

“She’s inspirational,” French says of her mentor. “It’s an honour to be tutored by one of the greats — she’s so generous with her knowledge.

“It’s made me braver, freer, unafraid to use colour. It’s given me the courage to stand by my work and to paint what I like, to keep my integrity.”

French’s output is now refreshingly eclectic — ranging from small collages to large landscapes in oil, nudes, portrait commissions and even textile design, with a commonality in her expressive use of colour.

There’s a surreal quality to her style. “I love putting animals in unexpected situations, out of context. I started doing some collage years ago and now I’m trying to incorporate them into my paintings.”

So there’s a tiger in a crown, a zebra on a Chesterfield sofa, and a quizzical-looking rabbit perched atop an orange ball. “When it all gets a bit much I paint bunnies!” jokes French.

French paints mostly in oils. “It’s sexy and unctuous and full of lovely pigment — beautiful stuff. You can go into it and muck it around.”

It’s perhaps her playful use of colour that attracted the designer Paul Smith to her work.

“I had always admired Paul Smith because I love his work and his support of the arts,” she says of a recent collaboration with the designer that resulted in her paintings being displayed on his eclectic in-store art walls worldwide.

“One of my prints is now in his new shop in Manchester and they will be available to buy online through the Paul Smith website soon.”

Each day French travels from her home in Rotherfield Greys to work at her studio in Singers Lane, Henley, where her neighbours are three other artists and a framer.

“My studio is a bolthole and a sacred space, it’s quite magical here,” says French, reflecting that the Singers Lane studios have become something of an artistic hub in the heart of Henley.

“The landlord is particular about wanting creatives here and nurturing a creative atmosphere. We are really lucky — it’s a haven.”

The studios open their doors to the public during the Henley Arts Trail each spring and French plans to host a small open studio weekend at the start of December.

She welcomes appointments to view her work, saying: “It’s important to see the process that goes into creating — where the piece of work was ‘born’.”

Her day starts with a cup of tea before the creative process begins.

“I don’t sketch, I go straight in big,” she says. “I can have weeks when nothing happens and then have a breakthrough — then I can produce a lot of work in a short space of time. It’s tortuous because you are chasing that time when it all goes right and 90 per cent of the time it goes wrong!”

Her inspirations come from her experiences. “What you read, see — it feeds your work. I make sure I go to London and Oxford and see shows.

“I go on painting trips — Lambay Island off Ireland with seven painters. It was like being marooned there — with no cars, shops, the boat goes twice a week. It’s really important for your soul to be with other painters, it’s almost a tribal thing.”

As for future plans, she dreams of travelling to India to paint. For now, though, her aim is to have one London show a year — and to keep busy breaking the rules.

The Hepsibah Gallery is located between Shepherds Bush and Hammersmith at 112, Brackenbury Road, London, W6 0BD. Visit it online at http://hepsibahgallery.com