Artisans have a fair old Christmas treat in store 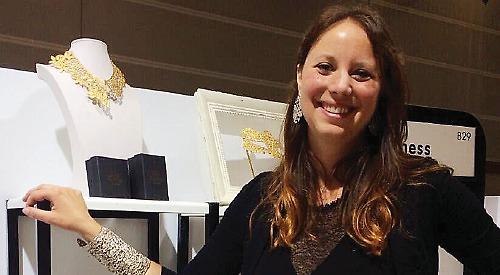 WITH Christmas just over a month away, the time of year when present buyers start to cast around for that special, unique gift for a loved one is fast approaching.

Happily, Henley’s community of artisans, creators and craftspeople have come up with a creative way of meeting the flood of festive demand.

Following on from the three-day Christmas market taking place in Falaise Square from today (Friday) until Sunday, a Christmas Artisanal Craft Fair is being held in Henley town hall on the evening of Wednesday, November 29.

Running from 6pm until late, the fair is the brainchild of Julia Carey of Julia Burness Jewellery and will feature 22 different stallholders selling everything from stained glass decorations and personalised poems to hand-made wipe-clean mats for children and babies to play on.

With free entry, free mince pies for all and a collection box on the door for Sue Ryder, the organisers are aiming to spread a little Christmas cheer just as the festive season gets properly under way.

Julia, who lives in Reading Road, said she came up with the idea for the fair back in September.

“I really wanted to sell my jewellery and the only thing available at that time was the Christmas fair, which is outside stalls.

“It’s really nice but it’s just freezing and I really wanted to be inside and do something really comfortable for us all to sell our various bits.

“I had my eye on being at Phyllis Court but there was no room, so instead I just thought, oh, fine, just do one yourself.

“I literally couldn’t find any other stalls, but I put something on Facebook and it was just like a dry sponge — I had a flood of interest.

“Loads of people responded and now we have over 20 of us taking a table each in the main hall at the town hall.

“We considered all of our options and decided that Henley town hall would be the best and easiest place to set up and to make it an evening event so that people could come by after work.”

Julia, whose jewellery includes items made from recycled bronze dipped in silver and gold, took part in the Henley Arts Trail earlier this year, exhibiting her work at the d:two centre in Upper Market Place.

She had originally intended to launch a new collection in the second half of the year, but has instead found herself busy working on individual commissions.

“I’ve been really lucky and I’ve had lots of bespoke work to do. People have come to me, so that’s just been brilliant — I’ve been really happy with that — and people are asking me for stuff for Christmas now.”

With 22 stallholders setting out their wares on the night, the fair promises to be a busy one.

Julia will have some competition from her friend Georgia Stoneman, who she studied alongside at London’s Sir John Cass School of Art, but the fair is aiming to provide as diverse an offering as possible.

“There’s local artists and jewellers and there’s a lady selling clothes, so we’re trying to make it as artisanal as possible,” says Julia.

Other stalls at the fair will include photographers, scented candles, food hampers, remedies, pickles and jams, and massage therapists.

Jeweller Georgia Stoneman lives in Wargrave but originally hails from Cornwall, where she runs the Stoneman Gallery in Madron near Penzance. On the night of the fair she will be selling necklaces with olive green pearls, labradorite and silver pebbles.

Georgia’s pieces are made primarily from precious metals, silver and gold, with precious and
semi-precious stones and pearls — but she also sometimes incorporates found objects into her designs.

She says: “The jewellery is the result of a love and understanding of natural forms. Simplicity is key and the material is left to speak for itself and treated with minimal finishing methods.”

Georgia’s Wargrave neighbour
Alex Limia Dieguez is the creator of Ally Pally Poems — of which there are two kinds.

The first are ready-written poems that can be bought “off the shelf” or ordered on the night of the fair and personalised with a name, date and short message.

Alex says: “My best sellers are my poems for naming days and christenings, which can have a child’s name and the date of their naming or christening added to them.”

Then there are Alex’s bespoke poems, which are written from scratch, based on a questionnaire that the customer fills in.

“These poems can be framed with or without photgraphs and they’re perfect for celebrating the special people in our lives as they’e such a personal gift,” says Alex.

As well as being an artist, Amanda McGregor is a published poet and author who also teaches the MA course in Applied Imagination at London’s prestigious Central Saint Martins school of art.

Closer to home, she also offers soul and psychic readings, which will be available on the night of the fair.

Amanda, who grew up in Henley and now lives in Checkendon, says that as an artist she finds inspiration in the natural world.

“My work is to enable the creative spirit to evolve, heal and inspire,” she says. “At the fair I will be showing some watercolours, paintings and print work. Some of my work is floral and enables a kind of mediation in nature, giving peace and relaxation.”

Peace and relaxation are likewise important to Jo Cunningham, the founder of Messy Moves — a company specialising in PVC-coated cotton play mats for children.

Jo, who lives in Henley with her daughter Daisy, who is about to turn three, said: “Messy Moves came about as the result of a conversation I had with a friend who has a little boy around the same age as Daisy.

“Our babies were just starting to sit and tumbled a lot. My friend had been trawling the web for a big, soft play mat that was also wipe-clean to cope with no-nappy time.

“I was looking for something similar but neither of us could find a mat that ticked all our boxes.”

As a keen seamstress who also makes a range of cushions that will be on sale at the fair, Jo was able to come up with a solution that fit the bill — and Messy Moves was born.

Looking ahead to the big night, Julia said she was surprised by how straightforward it had been to hire the town hall and extended her thanks to Henley Town Council.

“It was very easy,” she said. “Much easier than I imagined it would be, and I thought ‘that’s great’. The stallholders have completely 100 per cent split the cost of everything equally, so it’s been really affordable for everyone — I think everyone’s going to be happy.”

• For more information, including a full list of stallholders, visit the fair’s Facebook page at www.facebook.com/
HenleyChristmasArtisanFair