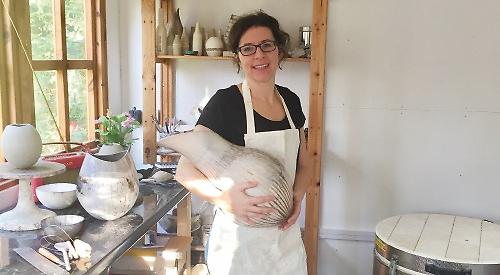 IT’S been running every year since 2006 and has become a firm fixture in the town’s cultural and social calendar — but the organisers of the Henley Arts Trail aren’t afraid to innovate.

The 2018 event has its grand opening tonight (Friday) with the launch of the Henley Art and Crafts Guild’s spring exhibition at the Old Fire Station Gallery in Upper Market Place — otherwise known as venue one of the trail.

This starts at 6pm and runs till 8pm, with the exhibition itself set to run daily from 10am to 4pm until Tuesday, May 8.

However, art lovers will have to wait until next Saturday (May 5) for the full-scale trail to get under way.

Running over all three days of the bank holiday weekend, this year’s trail has been extended still further by the addition of two new events — the first of which aims to get under the skin of some of Henley’s leading artists.

“Artists in Conversation” will take place within the auspicious surroundings of Henley town hall, yet the mood will be informal — a Q&A panel discussion that promises to delve into the work of painters Camilla Dowse and Genevieve French and ceramicist Hannah Wilson.

Taking place on Saturday, May 5, at 4pm, the event has been conceived by the Creative Duck — a Henley-based networking group that runs talks and meet-ups for creatives and small businesses in the area.

Co-founder Nicola Nott, who will be interviewing the artists, recalls how the partnership with the arts trail came about.

“Our aim was to get closer to some of Henley’s best known artists and hear their story,” she says. “We were inspired by the Henley Literary Festival, where you hear from the authors, and thought it would be really great to hear from the artists themselves — a chance for the public to hear the human story behind the often ‘unseen’ creators. The town hall is a real coup — it’s really special to have the council chambers as a venue, which will feel steeped in history yet intimate at the same time.”

Arts trail co-ordinator Jo Keiller adds: “We were delighted to be approached by the team from the Creative Duck, who are keen supporters of the local arts community. By forming this collaboration, we hope to develop stronger links amongst local artists, offering them a support system and a network.”

The panel discussion will explore the creative process of these talented artists and their own stories of success, including their career highs and lows, overcoming crises of confidence and how they got their big break.

“We’ll be asking what inspires them and advice they have for budding artists,” adds Nicola. “It’s also a chance for people to ask their own questions about how to ‘make it’ as a successful artist.”

The event is particularly timely for one of the trail’s “star” artists, Camilla Dowse, who has just won the Neil Meacher RI Award for an outstanding watercolour at the Royal Institute of Painters in Water Colours’ annual exhibition in April.

Camilla has already built a
wide-reaching following for her local urban landscapes, which combine textural brush strokes and cool pastel tones for refined and calming compositions.

The artist creates her acrylics on gesso and watercolour paintings at her studio in Singers Lane, where she will be opening the doors to visitors during the trail. (Singers Lane Artist Studios are venue number nine.) “I agreed to the conversation because I need to push myself more,” says Camilla. “Someone once told me the artist is as important as the art. Whereas I have always let my work speak for itself and have kept a low profile, but I’m trying to leave my comfort zone a little and face a room — hopefully — full of people. Anything new on the trail is a good thing. It’s a wonderful local event and it should keep evolving and testing out new things and the Creative Duck conversation is one of those things.”

Another Singers Lane artist showing her work on the trail, Genevieve French has garnered critical acclaim for her vibrant oil paintings, portraiture and collages — recently catching the eye of designer Paul Smith, who sells her prints in his stores.

Ceramic artist Hannah Wilson works out of her garden “shed” studio but will be exhibiting at the Henley-on-Thames School of Art (venue number three on the trail).

She hand-builds and smoke-fires clay to create nature-inspired pieces, creating intricate textures and patterns that are formed by a deliberately organic process.

“This event is an opportunity for me to share more about my work, my processes and my inspirations — something that isn’t always possible when work is viewed in a gallery,” says Hannah.

“Artists in Conversation” is part of a regular series of talks and workshops run by the Creative Duck, which aims to bring together a community of local creatives and small businesses.

“Our aim is for creatively-minded people to come together and be inspired, collaborate and learn from each other,” says co-founder Sarah Gilbert. “There seems to be a real thirst for this kind of educational event. So far we’ve hosted sold-out talks on topics such as social media, PR, product photography and our next event will focus on sustainability for small businesses. To be part of the arts trail is the perfect opportunity to celebrate Henley’s creative community and keep it thriving, which is such a benefit for the town itself.”

Tickets for the “Artists in Conversation” event are £5 and can be purchased on the door or online via www.thecreativeduck.co.uk

It will be followed a week later by the second new addition to this year’s Henley Arts Trail — a series of hands-on art workshops for all ages at St Mary’s School in St Andrew’s Road.

Running from 10am to 4.30pm on Saturday, May 12, the workshops are either 90 minutes or two hours and cost £10 per person or £10 per adult and child. For a complete list of the workshops on offer, including details of how to book, visit www.stmarys-henley.co.uk/
school-life/henley-arts-trail

Next week’s Henley Standard will carry a full list of trail venues and times, but for more information visit www.henleyartstrail.com

Full details are also included in the Henley Arts Trail 2018 brochure — 30,000 of which are being distributed locally to promote this year’s event.