Exhibition looks into the debt our heritage owes John Piper 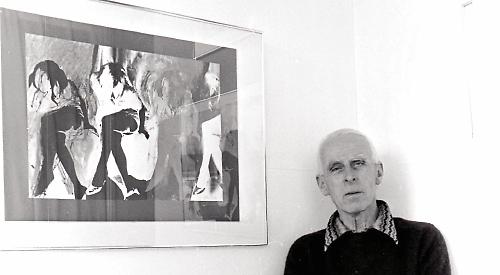 Now a new show that has just opened at the Bohun Gallery is making the case for John Piper, who lived in Fawley Bottom, being “a very English artist”.

Gallery manager Katie Newman said: “This summer we will be examining John Piper’s travels around the British Isles and his contribution towards the protection and maintenance of our English heritage.

“In post-war Britain the collaboration between John Piper and John Betjeman championed great churches and endangered country homes, the emphasis on giving historic buildings new prominence and allowing them to grow into beacons of national identity.

“The exhibition begins with his role as a war artist, raising public awareness of the vulnerability of the national heritage in ‘Recording Britain’. His 1940 painting Valle Crucis Abbey gives an early indication of his unapologetic joy in the simple characteristics of the building which were to form the artist’s modus operandi. Later, at the height of his career, he became an integral part of a growing body determined to protect and maintain our English heritage for future generations to explore and enjoy. We owe a debt of gratitude to this very English artist.”

The exhibition runs until Saturday, July 28. Opening hours are 10.30am to 5pm, Tuesdays to Saturdays. For more information, including a preview of the works on show, visit www.bohungallery.co.uk