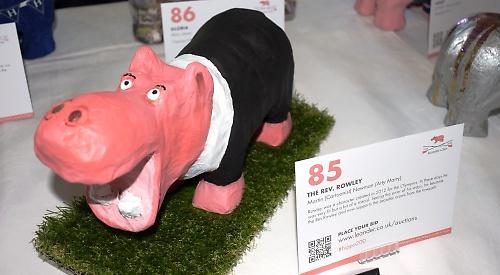 TWO hundred miniature hippos decorated to mark the bicentenary of Leander Club in Henley went on public display for a day.

The hippo is the rowing club’s symbol so it invited individuals, schools and businesses to customise the 18cm high papier-mâché figures for a community art project called Hip Hip Hooray.

People could paint, paper, dress, decorate or embellish them however they wanted and the resulting artworks went on show at the River & Rowing Museum in Henley.

Linda Saul, a member of the Henley Arts and Crafts Guild, draped her hippo in red, white and blue bunting and had it holding a sculling boat in its jaws.

She called the piece “King of the River”, which is how hippos are known in Africa and is said to be why Leander adopted the logo in the mid-1800s.

Pupils in year 6 at Valley Road Primary School in Henley gave their hippo a crown, beard and robes to look like Henry II in whose reign Henley’s first historical record was made.

Year 1 pupils’ hippo resembled the late magician Paul Daniels, from Wargrave, dressed in a suit and top hat decorated with playing cards and with a rabbit perched on top and a wand in his mouth.

This was paired with another resembling his wife and stage assistant Debbie McGee in a gold lamé and lace outfit with long eyelashes and lipstick.

The museum’s hippo resembled Mr Toad from The Wind In The Willows, complete with tweed coat and hat, in a papier-mâché boat with his friends Badger, Mole and Ratty.

A hippo dressed as a First World War soldier named Tommy was submitted by the Henley-on-Thames WWI Remembrance Association. He carried three poppies at his feet and was daubed with the slogan “Lest we forget, 1914-1919”.

Henley Town Council submitted a likeness of Kellie Hinton, who was mayor when the project was announced earlier this year, in the mayoral robes and hat with a miniature chain of office.

Artist and former rower Helen Stamoulis called her hippo Brookes The Oarsome Babe after Oxford Brookes University, for whom she rowed in the Nineties, and decorated it with gold, silver and bronze bells to represent the 127 Olympic and Paralympic medals that Leander has won.

Henley artist Nancy Marcello called her hippo Redders after Henley Royal Regatta chairman Sir Steve Redgrave, a former Leander athlete who won five Olympic gold medals between 1984 and 2000. It was decorated with gold and silver studs plus five miniature medals made from painted 1p coins and a red, white and blue ribbon with crossed silver oars.

The hippos will now be exhibited at shops, homes and businesses in Henley until the end of the month and there will be a trail for people to walk round and see them all.

They will then be used in this year’s regatta shop window display competition and some will be displayed at the Henley Festival.

They will be reunited at Leander Club’s family day on July 22 before being returned to their creators or auctioned for charity. Each hippo has a label with a QR code, which can be scanned using a smartphone, to find out more about it and place a bid. A private viewing was held at the museum attended by more than 200 people including the artists, Leander and Team GB rowers Vicky Thornley, Will Satch, Jack Beaumont and Ed Fisher, the club’s general manager Paul Budd, Henley Royal Regatta president Mike Sweeney and Henley Mayor and Mayoress Glen and Anna Lambert.

This also marked the launch of an exhibition called Leander Club: The First 200 Years, which traces the club’s history from its origins at a boatyard opposite the Houses of Parliament to its latter-day triumphs. This will run until July 15.

Guests were welcomed by the museum’s chairman David Worthington, who said: “Leander Club has an unparallelled record in the sport of rowing and I would like to congratulate them on their 200th anniversary, which is quite a staggering achievement. We are delighted and proud to welcome them and their athletes to this celebration.

“The museum has been here for 20 years and it’s important that we remain at the heart of this community because the jewel in Henley’s international crown is undoubtedly its rowing. We really punch above our weight and it is thanks to institutions such as Leander Club and its supporters.”

Hugh Richardson, the club’s honorary treasurer, raised a toast and told guests: “We are blessed to have this museum in our community and it is a privilege to be recognised with this special exhibition.

“It’s wonderful that we can honour our heritage as we are merely stewards of a proud tradition which has included some great periods and others when we weren’t so much ‘in the pink’.”

Shelley Robertson, of Wilson Avenue, Henley, who organised the hippo project with the club’s house manager Caroline Mulcahy, said: “We’re delighted with how it’s gone. What has come back is far beyond anything we thought people were capable of. We’re glad we didn’t make it a competition because we couldn’t judge the ‘best’ one as they’re all beautiful.”