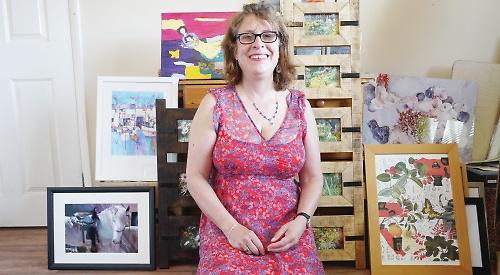 THREE artists from the Thames Valley have joined forces to show their work at Henley’s Old Fire Station Gallery.

Sally-Anne, from Henley, staged her first solo show in 2015. Photography was her main medium for many years but in 1990 she trained as an interior designer. She now describes herself as a colourist in an impressionist vein but likes to experiment with different styles and mediums.

Twyford-based Richard Conway-Jones has travelled widely in Europe, painting scenes and churches in watercolour, and has had numerous one-man shows in London and Berkshire.

First-time exhibitor Sue Laker from Goring is a photographer who has recently returned to painting and drawing. Her subjects are taken from life or photographs, using such mediums as soft pastels, charcoal, pen and watercolours.

The exhibition opened yesterday (Thursday) and runs until Tuesday (June 12) at the gallery in Upper Market Place.

It is followed two days later by the first of two week-long exhibitions showcasing the work of
A-level students from The Henley College.

Running until Tuesday, June 19, and open daily from 10am to 4pm, over 70 photography students will be displaying their second-year work — followed by more than 40 creative media production students from Thursday, June 21, to Tuesday, June 26.