Festival’s star sculptor refuses to dial it down 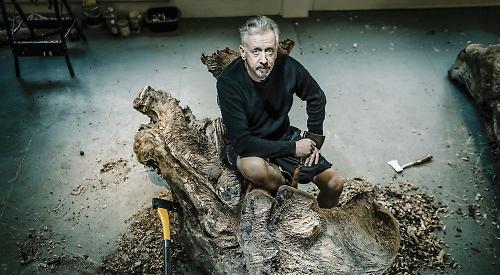 DAVID MACH remembers his last visit to the Henley Festival all too vividly.

“The place was just a sea of mud,” he recalls. “I imagine it’s changed quite a lot but I do remember getting changed — we had a van and we were changing into evening wear in the back, lying horizontally in the van while it was being buffeted by landing helicopters, which was hilarious.”

Now 62, the award-winning Scottish artist and sculptor dates this episode back 20 or 30 years — “donkey’s years ago” as he puts it.

Go back 30 years and you would have found Mach planning the iconic public sculpture for which he is still perhaps best known.

Unveiled in 1989 in Kingston upon Thames, Out of Order features 12 red telephone boxes arranged like a line of falling dominoes.

By 2000, ironically enough, the structure had fallen into disrepair and there were calls for it to either be renovated or moved to a different location — prompting Mach to defend his creation as “a real people piece”.

Praising Giles Gilbert Scott’s kiosks as “a good design by a great architect”, he added: “The boxes were an object that the British people embraced. It’s part of the blood, body and structure of Britain.”

Today he says: “The boxes kind of stood in as the national identity. We’ve got several objects that have got national identity — I mean the UK. That telephone box is definitely one of them.

“I think we screwed up taking those things out — we should have refurbished those original boxes.

“I mean, obviously there’s been a revolution telephone-wise, technology-wise, but there’s still a place for a kind of London bus — there’s a place for those telephone boxes, you know?

“There are a few things that are actually designed right through the whole of the UK and are relevant still to me for that, although they’re not part of that new technology, if you like.”

He adds: “It’s like a weird thing that binds people together — I like that kind of stuff. It’s just very good design, I think.”

The technology may have moved on, but the artist’s frustration at the difficulty of completely realising his vision remains intact.

“I begged them [the council] to have the upright box [in Out of Order] standing properly with a phone in it so that people could use the damn thing — and they wouldn’t do it. They wouldn’t plug it in like that for some reason, I don’t know why. But that actually makes it a kind of bigger, more alive thing, you know?”

While 1988 also saw Mach nominated for the Turner Prize, his personal fame as an artist continues to be outstripped by the high public profile his work enjoys.

An example of this is his Train — an imposing sculpture of an LNER Class A4 steam engine fashioned from 185,000 individual bricks that is sited next to the A66 just outside Darlington in County Durham.

The parallels with Mach’s temporary 1983 sculpture Polaris — which used 6,000 car tyres to create a life-size replica of a Polaris nuclear submarine outside the Royal Festival Hall on the South Bank — are not far to seek.

But when asked if he welcomes the chance to create permanent rather than impermanent public sculptures, Mach is indifferent.

“It doesn’t really bother me, you know? I’m not really all that interested in that — I’m interested in making the thing. And okay, it’s great if it does stay for a bit but it’s not the main reason for doing it.

“I mean, normally I’d make sculpture and I’d leave it for however long a show was on and then I’d walk away and leave it and go and do something someplace else.”

Right now, someplace else is Ireland, where Mach has been preparing a large-scale exhibit for the upcoming Galway International Arts Festival.

“It won’t be a permanent work like the telephone boxes,” he says, “but I’ve got 18 tons of newspaper, a Ford Escort, a yacht, a caravan and a big space — we’re just in the middle of building that.”

The works Mach is bringing to the Henley Festival, which opens on Wednesday (July 11), may be on a slightly smaller scale, but they are no less intriguing for that.

One of the standalone sculptures, Spike, is a life-size cheetah fashioned from hundreds of wire coat hangers.

For movie buffs attending the festival, Spike may have an oddly familiar look to it, having featured in the 2013 film The Counselor starring Michael Fassbender and Cameron Diaz (whose character Malkina had two pet cheetahs).

“That’s one of the last coat hanger pieces I’ve got,” says Mach. “It’s been hanging around for a while, you know? It’s been in various places — in films, in galleries and exhibitions all over the place, but at the moment it’s in the studio. I’ve been using it as a Christmas tree as well because there’s some fantastic Christmas tree optics there!”

Other works Mach is bringing to Henley include collages — some of which he will create exclusively for the festival. These will include more from his popular Commando series based on the fortnightly war comics published by DC Thompson that Mach grew up reading.

“Paper’s quite a big sort of a theme for me,” he says. “The comics are fantastic because I’ll use one and remake images with the visuals in those little comics, you know? I’ve used the Beano, the Dandy, the Bunty, the Victor and all that stuff, so I’m making a new set of — they’re almost like mini-collage. Postcard-sized collages. I’ve got a giant vein of that material, so we’ll have some of them for Henley.

“There are some bigger collages, which is sort of my most regular stuff, so that will feature Henley and there will be links to being by the river there — that’s intentional.”

SOME of the UK’s most engaging contemporary artists will be putting their work on show at next week’s Henley Festival. Joining Turner Prize-nominated David Mach is Charlie Waite, one of the world’s most celebrated landscape photographers. Other sculptors with work on show at the festival include Rosamond Lloyd, who specialises in wildlife, and Nik Burns. The innovative digital art collective LightWeight are also part of the packed visual arts offering.