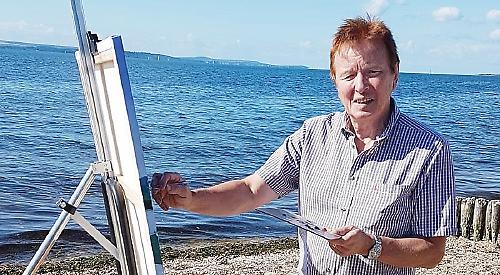 A PAINTER who loves capturing the effect of light playing on water is setting up shop at Hambleden village hall this weekend, writes Matthew Wilson.

Howard Birchmore will be joined at the venue on Sunday (September 23) by fellow artists Sarah Pye, Clive Eastland and Sandie Ebdon Jackson.

Their show, Art for Interiors, runs from 10.30am to 5pm. Entry is free, but a collection will be taken for Great Ormond Street Hospital. The event will also feature a stall selling ladies’ fashions.

Howard specialises in painting majestic seascapes from around the west of the British Isles. He also enjoys painting in Italy, where he strives to infuse his work with the essence of the age and the history of the subject depicted.

He said: “When I paint I want the picture to strike a chord with the viewer. I want to evoke that initial feeling I get after I have driven down from London and I step out of the car on to the beach or a secluded bit of coastline and I feel the fresh breeze on my face, the sun on my skin and the sand under my feet. I like to think my artwork is canned reality that can be experienced every time you look into the frame.”

As a child Howard liked to draw. It was a hobby just like any other, but by the time he was eight years old his teacher had discovered his talent and often asked him to draw enlargements from books and maps to be used as teaching aids.

By the age of 12, Howard had secured and completed his first commission. During his late teens and twenties the majority of his time was spent playing music in a variety of bands.

However, spurred by a desire to reconnect with painting and make a full-time career in the creative industries, Howard attended evening classes, studying illustration.

He went on to work in the publicity and public relations department of British Rail, where he was involved in preparing all types of artwork and promotional material.

Here he met another artist, Jane Green, with whom he took the decision to leave British Rail and set up a graphic design agency together.

“My business partner was moving on and I wanted to find whether it was possible for me to make a living from my paintings,” he says.

“I realised early in my career as an artist that I wanted to paint breathtaking colours in a realistic and detailed style.

“While the study of art provided me with many diverse techniques, my interest remained solely focused on the capture of the effects of light.”

Howard’s paintings are becoming ever more collectable and his expertise in depicting light on water has resulted in many commissions.

He exhibits at Kendalls Fine Art in Cowes on the Isle of Wight, the Mayne Gallery in Kingsbridge, Devon, Sheldon Fine Art in Newport, Rhode Island, in the USA, and other galleries on a seasonal basis.

This Sunday’s Art for Interiors event is the first of two, with another planned for Sunday, October 28, again from 10.30am to 5pm.

Howard’s work can be seen on his website at www.
howardbirchmore.co.uk

For the Hambleden shows he is including a number of works of the Thames and the local area.