Student’s film goes to the heart of family life 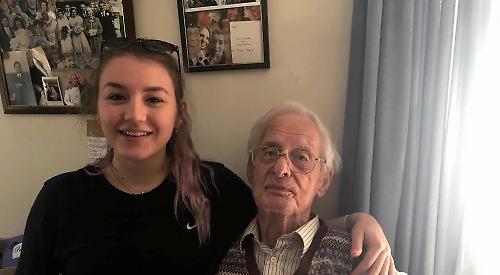 A 19-YEAR-OLD student from Henley has made a short film tackling an issue that strikes at the heart of family life.

Olivia Crook chose to investigate the subject of dementia in a drama based on the experiences of her own family for the final project of her Creative Media Production course at The Henley College.

The 12-minute film — titled “Forgetting, Forgot, Forgotten” — explores the problems faced by a growing number of families as they decide how best to cope with increasingly frail elderly relatives.

Olivia’s film is part of an exhibition of Henley College students’ work running at the Old Fire Station Gallery in Market Place from Thursday (June 13) to Tuesday, June 19.

Alongside short films by other students on the course, the work on show will include documentaries, radio dramas, advertisements and music videos.

She was inspired to make the film after her grandfather, Peter Roberts, was diagnosed with dementia.

Olivia said: “I wanted to make the project personal to me. Dementia has affected both my granddads but I wasn’t sure if I was going to be able to use it as a topic for my project.

“But the more I spoke to my teachers the more I realised that I could make a film about the subject.

“Most people don’t really understand what it’s like living with a relative who has dementia because they don’t see what’s going on.

“I decided to make a drama based on my family’s experiences rather than a documentary because I thought it would be a gentler way of telling the story.

“Because of how far my grandfather’s condition has progressed I didn’t think I would be able to interview him, but by filming him in an observational manner I could tell the story in a first-hand way.

“My mum’s side of the family are quite open about the subject. She looks after him and so it was easy to talk to her and my sisters about starting the project.

“Filming was very difficult because everybody was on different schedules, so I had to plan carefully to film the scenes I needed. My mum does so much as well as looking after my granddad, so it was hard to find time for filming.”

Ahead of the exhibition, Olivia’s film can be viewed online at https://youtu.be/-NqFvQPGjq0. A short “behind the scenes” featurette can also be viewed on Olivia’s YouTube channel.

“The Henley College has been really good for me,” added Olivia. “I started on an A-level programme but I find exams very difficult so I switched to an extended diploma after the first year. I really enjoyed photography so I kept that on as an A-level while studying Creative Media Production.

“It was really hard doing both but I got an A grade in photography last year, so it felt worthwhile. The diploma course is very hard but it is also fun. It allows you to be creative but also teaches the skills you need to bring projects to a successful conclusion.

“You learn how to meet the requirements of the exam board while exploring your own creative ideas.

“I’m going to study film production at Portsmouth University in September. It will allow me to find out more about different areas of the film industry, which is where I want to work.

“Before I came to The Henley College I never would have dreamed of going to uni — I thought I would go straight into work, but coming here allowed me to see all of the opportunities that were open to me.”

“Forgetting, Forgot, Forgotten” also features Olivia’s mother, Donna. Olivia said: “I wasn’t sure how she would feel because the subject is so close to home and she is quite a private person. At first, she was quite hesitant but once I started to work out how I would film she realised that it might help other people understand how hard it is to cope.

“My mum hasn’t actually seen the final edit but I showed it to my sister and she cried when she saw it. She told me that she thought it was true to life and had captured the essence of the story.”

The Henley College’s creative media course is a two-year extended diploma designed to prepare students for work in the media industry. The sector is expected to be worth £76 billion to the UK economy by 2022, according to accountancy firm PricewaterhouseCoopers.

Course leader Sarah Wilson said: “I’m so proud of what our students have achieved this year. The extended diploma is a challenging course that prepares them to work in a very competitive industry.

“We encourage the students to take a professional approach to their productions and to express their ideas in a creative way.

“Our students have produced documentaries investigating PTSD in military veterans, food poverty, extremism in vegan campaigners and the lives of drag queens.

“The short films have included psychological thrillers, horror and comedy. Music videos have explored the conflict between teenagers and their parents, body-image and domestic violence perpetrated by women on men.

“This year our students have been offered places at the universities of York, Manchester, South Wales, Southampton and Bournemouth.”

The work from second-year students on the Creative Media Production course can be seen at the Old Fire Station Gallery from June 13 to 18. Admission is free and opening hours are 10am to 4pm daily and 11am to 4pm on June 16.

An exhibition showcasing the work of A-level photography students follows from June 20 to 25.

• For more information on The Henley College’s range of courses, visit www.henleycol.ac.uk/courses