Maps real and not are a reflection of their makers 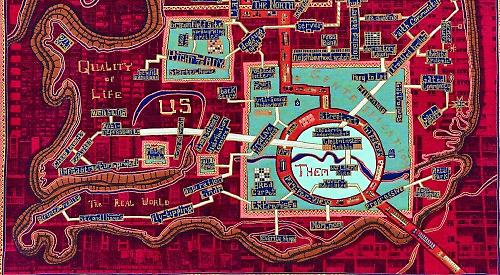 AT the entrance to Talking Maps, a new and mind-expanding exhibition at the Weston Library in Broad Street, Oxford, is a great recreation of a 12th century map of the world engraved on silver plates.

The original map was commissioned by King Roger of Sicily and drawn up by a Muslim geographer.

There are several unusual features to this map. It has south at the top, not the bottom. It puts the Arabian peninsula in the centre. And because it’s engraved on silver, you can see a blurred version of yourself, just as the king and the original craftsmen would have done.

It’s a reminder that maps don’t just plot contours and coastlines but also offer a reflection of their makers and users.

Early maps of the world — mappae mundi — might put Jerusalem or Mecca at the centre, because religion was what mattered. Old maritime charts didn’t show interiors because only the ports and trade routes were significant.

The artist Grayson Perry provides a contemporary version of the mappa mundi with a giant engraving titled “Map of Nowhere”.

Full of detail, what lies at its centre is the Island of Doubt.

Perry has another exhibit. A large tapestry titled “Red Carpet” shows a distorted version of the United Kingdom, with woven features such as “Westminster Bubble” or “Off grid” (in north-west Wales).

There are other imaginary maps in this excellent exhibition ranging from a CS Lewis outline of Narnia to Robert Louis Stevenson’s Treasure Island.

Stevenson also collected “stick charts” — frames of wood and tiny shells showing ocean currents, not carried but memorised by Pacific islanders for navigation. The one on display here looks like a delicate abstract sculpture.

Alongside this exotic trove are some deadly serious items: trench maps from the First World War and the D-Day landings.

Paper shortages explain why a map used by the British in their advance into Germany was printed on the back of a map (of Essex) intended for German use in the planned invasion of England.

The scale can be local as well as global. The desire to solve Oxford’s eternal traffic problems led one town planner to design a new road system in the late Forties.

Part of it involved a road bisecting Christ Church meadow. A caption tells us that the college was not enthusiastic.

The odd thing is that though the results would probably have been ugly and polluting, the designs are clean, clear and attractive.

Another Oxford map, produced by the Temperance Union, plots with red dots all the 319 pubs and drinking establishments in the city in the 19th century. Curiously, north Oxford has few red dots. That’s where the licensing magistrates lived.

In a section titled “The Country” the evolving study of one area, Gloucestershire and the Severn Estuary, is illustrated with some beautiful maps, whether tapestry or printed.

Meanwhile the Laxton Map from the 17th century concentrates on the filleting of the land round a Northamptonshire village into thousands of tiny, tilled strips. A labour of cartographic love drawn and painted by a land surveyor.

Assembled from the million and a half cartographic items in the Bodleian collection, Talking Maps demonstrates how maps of all ages, sizes, shapes and colours can be a wonderful combination of accuracy and art.