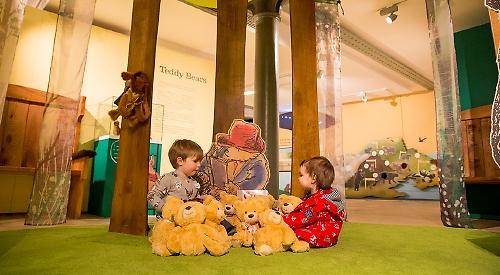 THERE are going to be bears everywhere at the River & Rowing Museum this summer.

A new exhibition titled “Bears!” opens next Saturday (August 3) at the museum in Mill Meadows and runs until Sunday, November 3.

And with a number of family friendly workshops and events lined up over the summer holidays, if you’re going down to the woods today, RRM is the place to be.

The Bears! exhibition was created by the Newcastle-based Seven Stories, The National Centre for Children’s Books, meaning it has a distinctly literary bent.

An RRM spokesman said: “Revisit your favourite stories and meet some of literature’s most famous bears, including Rupert and Winnie-the-Pooh, before discovering new stories filled with polar bears, panda bears and toy bears.

“The exhibition features original artworks and manuscripts, including Hugless Douglas, Mr Gum and the Dancing Bear, We’re Going on a Bear Hunt, The Bear and The Piano and Philip Pullman’s His Dark Materials.

Looking ahead to the special activities, events and exhibition extras, the spokesman added: “Join the River & Rowing Museum for bear-filled family fun days and get your paws into loads of creative fun-filled activities this summer.

“Follow the bear paw prints around the museum, find the bears hiding in the galleries, and claim your paw print sticker!

“Every Friday, the museum team will be in the galleries for ‘Family Fridays’, a chance to enjoy bear games, craft and even more fun.”

First up on Tuesday, August 6, is a “Bees and Bears” creative workshop for children aged four to seven (accompanied by an adult).

The RRM spokesman said: “Who loves honey as much as Winnie-the-Pooh? Learn about the busy bees that make honey and create a crafty honeypot to keep your own treasures in.”

Two days later on Thursday, August 8, the museum is hosting a “Teddy Bears’ Picnic” family day from 10.30am to 4pm.

The spokesman said: “Take your teddy for a picnic and discover bears that live in the woods! Go on a bear hunt — can you spot the bears hiding in the trees? Make a paper picnic, create your own bear board game and hear your favourite bear stories. Make your own bear ears and top it off with a bear-faced face paint! It’s going to be a
bear-illiant fun day!”

The Teddy Bears’ Picnic is free with admission to the museum.

The series of children’s workshops continues on Tuesday, August 13, with “Paws with Personality” for ages seven to 11, tickets for which are £8.50.

“Be inspired by famous bears and create your own using a sock, felt, paper and your imagination!” said the RRM spokesman. “Fill your bear with personality and make its unique bear passport.”

On Tuesday, August 20, again from 10.30am to 12.30pm, there is the chance for four- to seven-year-olds to end the summer holidays partying like a bear.

“Make a jack in a box with Rupert or Paddington popping out — then conga all the way through Nut Wood with traditional party games!” said the spokesman.

“Find out how to make an armature so that you can create a 3D model of a bear — climbing, walking, sleeping — whatever you like!” said the spokesman. “Then use mod roc to create a proper sculpture to take home with you.”

Then on Thursday, August 29, there will be “Bears, Bears, Everywhere!” at a fun family day that runs from 10.30am to 4pm and is free with museum admission.

“Discover bears from around the world — polar bears, grizzly bears, bears that swim, bears that climb and even bears with spectacles!” said the spokesman. “Take our great bear quiz and get crafty making your own bear world. Add your paw print to our giant bear and have fun singing bear songs.”

Other, less bear-related events taking place at the museum in the coming weeks include a “Meadow Flower Power” workshop for seven- to 11-year-olds on Tuesday (July 30) from 10.30am to 12.30pm, tickets for which are £8.50.

“Make a dreamcatcher inspired by the landscape and craft beautiful paper flowers for decoration. Explore the wild flowers around the museum and discover nature on your doorstep.”

The following Wednesday (August 7) there is a chance for children aged 12 to 16 to take part in a “Landscape in Mixed Media” workshop from 1.30pm to 4pm, tickets for which are £10.

“This is an opportunity to go out on the river meadows by the museum and sketch,” said the spokesman. “Develop your skills in composition, colour and perspective and experiment in using mixed media.”

Running from 10.30am to noon, these will offer creative summer fun with song, crafts and games. Tickets are £6.50.

Then on Monday, September 2, older children aged 14 and upwards have the chance to go “behind the scenes at the museum” and find out what curators do.

“This is the first in a series of opportunities for young people to find out what goes on in a museum,” said the spokesman. “Curators will describe their roles, from planning an exhibition to looking after a collection. It’s a chance to get all the information you need for your Arts Award portfolio.”

Tickets for the “Spotlight Behind the Scenes” workshop, which runs from 2pm to 3pm, are £5.

Adult events return to the museum on Wednesday, September 25, with a talk on “The Upper Thames Patrol” by military historian and author Bill King.

The RRM spokesman said: “Learn about the development of this unique element of the Home Guard, with emphasis on the Thames from Maidenhead to Lechlade, and the structures and artefacts that can still be seen.”