Flamingoes and dormice were meat and drink to Pompeians 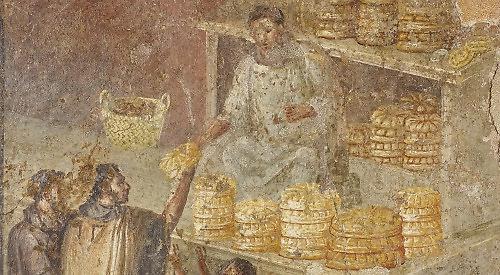 THE paradox of Pompeii is that the destruction of the town caused its preservation.

The Vesuvius eruption of AD 79 buried fields, vineyards, towns and a port — not to mention the people who lived and worked there.

But the lava and ash which cooled and hardened around bodies, houses and many small everyday items, also saved them for posterity.

The imaginative and fascinating new exhibition at Oxford’s Ashmolean Museum, Last Supper in Pompeii, focuses on food and drink.

The linking of the town and its food has been a lifelong passion for the exhibition curator, Paul Roberts. He first visited Pompeii as a child in 1976 and his mother was in the restaurant business.

Food and drink wasn’t only central to the economy of the fertile area around the volcano. As Dr Roberts points out in the lavish and informative exhibition catalogue, Roman writers seem particularly interested in food and drink, and all that went with them.

Last Supper in Pompeii takes us through every stage from growth and production to selling to consumption and — yes — to eventual disposal.

Toilets were often part of the kitchen and even here we see how everyday were the gods to Roman society: the goddess Isis Fortuna is a protective presence in a latrine fresco.

The rich soil around Pompeii produced the astonishing total of 100 million litres of wine a year.

Some of that would be sold in shops guarded by images of the gods and by bells to keep evil spirits away — including the rudest tintinnabulum or wind-chime you’re ever likely to see.

From the street the visitor passes into the entrance of a house, past the garden with its water features and into the dining room or triclinium, where couches would be arranged in a U-shape.

The lucky guests would be served by slaves, the “motor of the Roman house” and more comparable to Downton servants than galley slaves.

Those guests might gaze at beautiful decorative mosaics like the one on display here, showing a medley of sea creatures — each tiny mosaic tile the size of a fish-scale.

The wealthy ate reclining. They leaned on their left side. Better for the stomach. Better for digestion.

They ate exotically. Flamingo, anyone? A striking exhibit in the kitchen section is a dormouse jar. It has holes in the side through which the mice could be fed on acorns and water. A spiral ramp inside allows them to scamper up and down (but not out).

And while the Pompeians were eating, they might just be contemplating death. Another mosaic on display here is much simpler and starker than the delicate marine one. In black and white it depicts a skeleton bearing a jug of wine in each hand. It’s an illustration of the old Roman saying “Carpe diem”. Seize the day. Enjoy the banquet while you can.

A final exhibit is even more direct and poignant. Of all the human casts made from the moulds left by the hardened ash and lava only one can be transported, because it was created with resin rather than plaster.

Lying on her front, with her right arm outflung, the “resin lady” from Oplontis reminds us of the terrible, destructive power of that famous day in October,
AD 79.