Artists’ work is on the menu at cafe 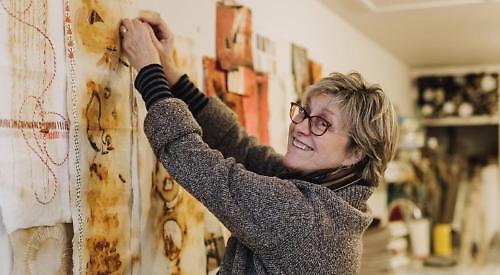 THREE artists are joining forces for an exhibition at the Granary Cafe in High Street, Watlington, that opens on Monday (September 9).

The trio met for the first time only a few weeks ago, but quickly bonded over their shared connections to the North East of England.

Jaine McCormack, who is also curating the exhibition, is a designer and artist who specialises in creating collages of found, collected and meaningful objects from her past.

One of the co-founders of Watlington Art Weeks held in May this year, she previously worked as design director for companies including Laura Ashley, Sanderson and the Guy Goodfellow Collection.

Born in Newcastle and raised in Northumberland, the work she is exhibiting this time around draws inspiration from the seashore and from the Chilterns landscape.

Marian Mills studied Fine Art in Nottingham, and worked for a variety of design and marketing companies as well as teaching art from primary school to college level. Now retired, she says she has been encouraged to start painting again by her success during the Watlington and Oxfordshire art weeks, which Jaine persuaded her to take part in.

Marian, who worked for Arts Council North while living in Newcastle in the late Seventies, is currently working in acrylics and says she is inspired by “the very special light that twinkles through the beech trees”.

Jo Burgess spent much of her youth in Newcastle and later worked in the music industry for many years promoting bands.

Her interior design business The Curious House was launched in 2017 following inspiration gained during the renovation of her Georgian house in Henley.

Jo is an accomplished re-upholsterer and loves finding salvaged, quirky and eclectic furniture and accessories for the home.

She specialises in curating and arranging collections of artwork, fabrics, mirrors and ephemera which she brings up to date with new frames or mounts.

“You could say I have a magpie eye,” says Jo, who sources her eclectic items from far and wide.