Exhibition of space artefacts is worth ‘boldly going’ to 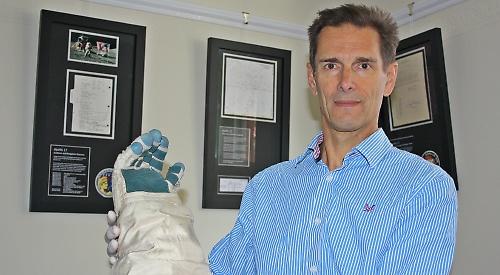 AN exhibition of space art and artefacts to celebrate the 50th anniversary of man landing on the moon is coming to the Old Fire Station Gallery this week.

The show, which has been curated by Apollo space programme enthusiast and collector Dr Michael Warner, is running from Thursday (September 19) until Sunday (September 22).

Thursday will seelocal schools attend by invitation from 2pm to 8pm.

But the exhibition is open to the public from Friday to Sunday, with a series of three talks lined up over the weekend.

Dr Warner, who lives in Queen Street, first announced details of the exhibition at a July 20 film show in Market Place that he organised to mark the 50th anniversary of the Apollo 11 landing.

This time around, both NASA and Soviet space artefacts will be on display.

“The artefacts on display include the extremely rare ‘rock manifest’ impregnated with lunar dust and written by Commander Eugene Cernan whilst on the lunar surface. The document records the weights of moon rocks collected during the Apollo 17 mission.

Dr Warner added: “A series of three talks will accompany the exhibition — the dramatic story of how Russian cosmonauts survived the rupture of the Mir space station after a collision in space, the rescue of the ill-fated Apollo 13 astronauts, and how the Apollo moon rock ‘orange soil’ samples from Shorty Crater provide evidence of the origin of life on Earth.”

Entry to the exhibition, which also includes examples of science-based space art, is free of charge.