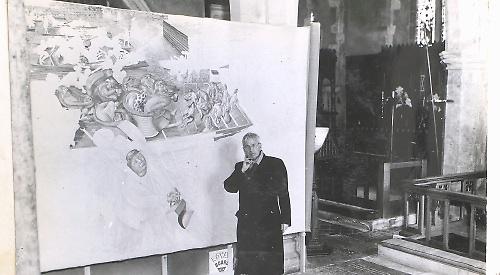 THE painter Stanley Spencer was born, lived and died in Cookham. For him this picturesque Thames-side spot was more than just a home, it was a paradise.

Spencer held deep if eccentric religious views. Just as the Renaissance painters posed biblical scenes against a backdrop of Italian hills and towns, so Spencer produced a panoramic resurrection scene in the graveyard of Cookham’s Holy Trinity Church and another titled Christ Preaching at Cookham Regatta.

This last piece, unfinished at the time of the artist’s death, is the largest item on display at the Stanley Spencer Gallery in Cookham.

The unpainted areas of the large regatta canvas are threaded with the painter’s preparatory grid and pencil outlines, while others are fully covered with figures including an urgent-looking Christ on a barge preaching from a wicker chair and the slightly bored disciples seated behind him.

The centrepiece of this new exhibition at the gallery, which was once the Wesleyan chapel attended by Spencer and his mother, is a famous early picture, Swan Upping at Cookham. On loan from the Tate Gallery, the painting took four years to complete.

The gap is explained by Stanley Spencer’s war service. He painted the top half of Swan Upping in 1915, then volunteered for service as a medical orderly in Macedonia on the eastern front. A changed man, he finished the picture in 1919.

Spencer described picking up the unfinished canvas on his return from war: “There we were looking at one another and it seemed unbelievable.” You can see the difference between the two halves in the treatment of the river water — the pre-war top is clear and sparkles in the sun while the bottom half is ridged and darker. The spiritual aspect is present here too, suggested by the mysterious figure on Cookham Bridge.

The exhibition includes preparatory studies for Swan Upping and other pictures that show Spencer’s intimate connection with his native village.

There is a wistful portrait of the wife of the vicar of Holy Trinity (the couple were friends of Spencer) and a delicate sketch of a Dutch au pair in the vicarage, done in 1958 and recently bequeathed by the subject herself to the gallery.

The Last Supper depicts a familiar religious scene. Yet Spencer has set the meal in a Cookham malthouse, complete with lovingly detailed brickwork. The disciples’ outstretched legs form a kind of ladder climbing up towards Christ. Their toes have been called “the best feet in art”. And if you stand at a certain angle a question mark appears on what may be the figure of Judas.

There is all this and plenty more to see in the small and gem-like gallery in the heart of the place which Spencer called “a village in heaven”.