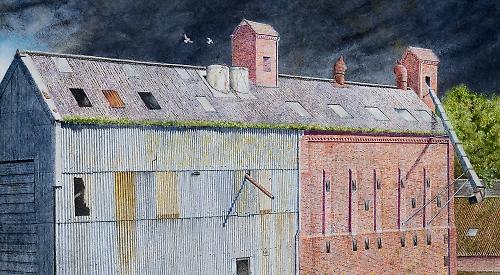 A NEW work by a Watlington artist has been selected for inclusion in next month’s Royal Society of British Artists annual exhibition at the Mall Galleries in London.

James Kelso’s painting The Treasure of Britwell Salome — Matins was chosen from more than 1,500 entries to be exhibited alongside artworks by some of the UK’s leading artists.

Mr Kelso, who has previously had work included in the Royal Academy’s summer exhibition, said: “The old granary at Britwell Salome is hidden from the road, shielded by trees and hedgerows, and I’d heard about its ‘fancy corbelling’ brickwork.

“The building is so big I decided to paint a pair of pictures, one front, one back — you have to decide which is which.

“One side gets the morning sun, hence ‘Matins’. As I worked, I could hear the nearby church bells. The far side takes the sunset — hence ‘Vespers’, which I aim to have ready by spring 2020.”

The exhibition is open daily from 10am to 5pm. Entry is £5, but is free for friends of the Mall Galleries and under-25s.

A Mall Galleries spokesman said: “The Royal Society of British Artists was originally set up to rival the Royal Academy. Today it prides itself on exhibiting an eclectic mix of sculpture and paintings.”

• Henley Standard readers who mention the paper at the gallery desk can obtain free entry for up to two people at a time.