Painter takes up the sunflower challenge 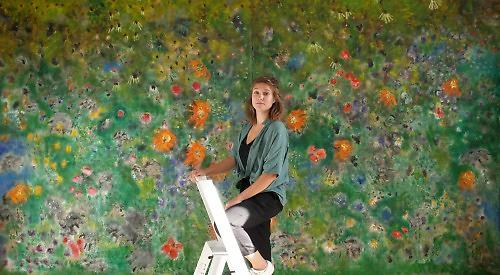 AN artist inspired by Van Gogh’s sunflowers is the subject of a forthcoming exhibition at the Informality Gallery in Market Place, writes Matthew Wilson.

Billed as a solo presentation of recent paintings by London-based artist Diane Chappalley, “Behind Closed Doors” opens next Saturday (February 15), when there is a launch event from 2pm to 4pm, and runs until Wednesday, April 1.

“For Diane Chappalley, a sunflower can be imagined, autobiographical and art historical all at once. They appear in her paintings from time to time — singular or in clusters — bloated and sun-drunk with drooping heads.

“Often they are entangled in verdant knots of flora which refer to the landscapes of both the Swiss Alps where she grew up and the hidden green spaces of east London, where she now lives and works. Conversely, the title ‘Behind Closed Doors’ alludes to a more private, domestic space — somewhere perhaps unknowable to the viewer.

“On closer inspection, these paintings cannot easily be described as landscapes in a traditional sense — the spaces described are often dense and feverish, misleading the eye. Using complementary colour to evoke shape and space, Chappalley builds up a visceral surface of coarse, dry paint — the rough surface of the flax linen providing staunch resistance to the brush.

“And then all of a sudden, you notice that the sunflowers don’t have stalks — some appear to be floating above the horizon — and in the painting Monte Verita, the sky is wrought in an unnatural, apocalyptic crimson.”

For more information, visit the gallery online at www.informality.co