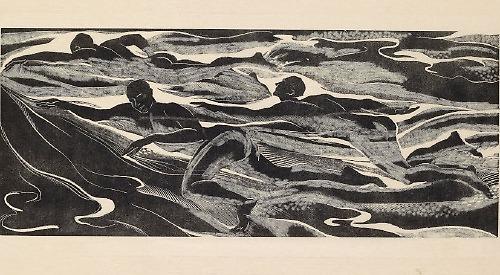 AN exhibition celebrating the artist Gertrude Hermes’s lifelong fascination with the natural world has opened at Henley’s River & Rowing Museum.

“Art of the Wild” is running until Monday, May 4, at the Mill Meadows venue.

Today regarded as one of the most imaginative wood engravers of her generation, Hermes was born in Bickley, Kent, in 1901.

The artist’s sister May said of her: “We all sensed there was something special about Gertie and her relations with animals, trees, plants, insects. She watched them so intently — seemed more finely tuned to all living things than most of us. Hers was a gentle wildness.”

In 1922, having attended the Beckenham School of Art the previous year, Hermes enrolled at Leon Underwood’s Brook Green School of Painting and Sculpture.

A River & Rowing Museum spokesman said: “Hermes’s prints evoke the pleasures but also the strange and sinister elements of water, plants and animals.

“Water is the key element in Hermes’s world. A keen swimmer and diver, she revelled in the physical sensations and abstract patterns of water.

“Using this inspiration from the natural world, she transformed her direct, and often scientific, observations of her surroundings into intricate wood engravings, large-scale linocuts and sculptures.”

The exhibition draws on the collections of Oxford’s Ashmolean Museum of Art and Archaeology.

A spokesman said: “This temporary exhibition at the River & Rowing Museum demonstrates Gertrude Hermes’s enduring fascination with the natural world — from her Jazz Age bird, fish and flower prints to her monumental coloured linocuts of the Fifties.

“By exploring the work of one of the most important but little known British female artists of the 20th century, this exhibition will uncover the roots of Hermes’s fertile creative imagination and introduce her exceptional work to a new audience.”

As with other River & Rowing Museum exhibitions, “Art of the Wild” is accompanied by a series of adult events and workshops for children and young people.

Coinciding with half-term, the first of these takes place on Tuesday (February 18). Running from 10.30am to 12.30pm, “Vole in a Hole” offers children aged four to seven the chance to make a fabric screen for their puppet vole to hide in and then pop out of.

The following day, “Wild Printing” runs from 10.30am to 12.30pm and will teach seven- to
11-year-olds how to create bold and colourful collograph prints full of texture and taking inspiration from the natural world.

This will be followed by “Wild at Heart!” from 2pm to 4pm, where 12- to 16-year-olds can decorate a heart-shaped box and make a unique fold-out book inspired by nature and Gertrude Hermes’s distinctive black and white prints.

Then on Thursday (February 20), the museum is hosting a “Glorious Greeks” family fun day from 10.30am to 4pm.

An RRM spokesman said: “Celebrate the ancient Greeks, birthplace of the Olympics. Discover fantastical beasts and stories of courage in the Greek myths, which will inspire you to get creative. Make paper pottery and a victor’s wreath and explore the origins of the zodiac. Experiment like Archimedes and find the Greeks in the museum galleries with our special trail. Will you turn your friends to stone like Medusa?”

Thursday’s family fun day is free with admission to the museum, while each of the children’s workshops costs £8.50.

The arty fun continues on Saturday, February 22, with the first of four adult events linked to the Gertrude Hermes exhibition.

Running from 10.30am to 3.30pm, the monochrome mixed media workshop with artist Camilla Shelley costs £45.

The RRM spokesman said: “Combine screen printing with sgraffitto and charcoal with white ink to create compositions inspired by nature. Gertrude Hermes’ distinct use of scale and composition and her command of monochrome will be the starting point for a series of mixed media works. Suitable for both beginners and the more experienced, you will also develop your skills in drawing from observation of still life.”

The workshop is followed on Thursday, February 27, by a public lecture titled “A Gentle Wildness: The Natural World of Gertrude Hermes”.

The spokesman said: “This talk by Dr Caroline Palmer of the Ashmolean Museum will demonstrate Hermes’s enduring fascination with nature — from water, whales and fish to trees and flowers. With examples drawn from her sketchbooks, prints and sculpture, it will focus on her training and technique, as well as highlighting literary and personal influences on her work.”

On Saturday, April 4, Camilla Shelley is hosting a second
one-day art workshop linked to the exhibition. “Gertrude Hermes: Black and White Boutis” runs from 10.30am to 3.30pm and costs £45.

The RRM spokesman said: “Create a block-printed panel on fabric inspired by Gertrude Hermes’s work and embellish your design with a ‘boutis’ style quilting technique. All materials will be provided but you will need to bring your own sewing machine if you prefer to quilt by machine. The workshop is suitable for beginners with experience of hand stitching.”

Then on Thursday, April 23, there is a second public lecture — “Down the River and Through the Woods: Wood Engravers and the Chiltern Countryside — again running from 11.30am to 12.30pm and costing £7.

The spokesman said: “This illustrated talk to complement the Gertrude Hermes exhibition will highlight other contemporary artists working in the wood engraving medium, many of whom had strong links with the Chiltern countryside. Locally based design and decorative arts historian Dr Graham Twemlow will explore the wood engravings and prints of artists such as John Nash, Clare Leighton, Agnes Miller Parker, Eric Gill, Stanley Anderson, and Eric Fitch Daglish.”

The museum advises that booking for the children’s workshops and adult events is essential. For more information, call the box office on (01491) 415600 or visit www.rrm.co.uk