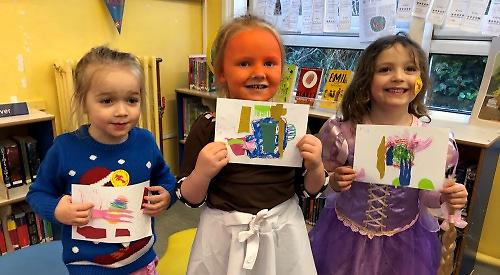 CHILDREN will have their artwork on display at the River and Rowing Museum as part of this year’s Henley Youth Festival.

Schools, art clubs and individuals entered for a chance to be part of the exhibition, which will run at the museum’s education centre tomorrow (Saturday) and Sunday.

More than 100 children were involved in creating six collaborative pieces of art. The exhibition will feature different techniques including, watercolours, collages, papier maches and clay.

Around 700 pupils from 12 schools enjoyed art workshops from March 2 to 6 thanks to this year’s festival, which has the theme of “oceans”.

Charlene Brown, who organises the art and film competition and exhibition, said: “The experience is uplifting — seeing all the art laid out ahead of judging. The oceans theme has really fired up the children’s imagination.”

Professional artists Camilla Shelley and Michelle Pratt will judge entries based on imagination, creativity and interpretation of the theme.

The winners will be revealed at a prize-giving ceremony on Sunday. The four categories are infant, junior, senior and collaborative.

Mrs Shelley, who delivered print-making and mobile-making workshops to a number of schools, said: “Oceans is a lovely theme that has been widely interpreted — from the beauty of the ocean and marine life to more thought-provoking pieces, particularly in the collaborative and 3D categories, where designs were obviously tackling environmental issues.

“In all categories the art has been exceptional. The children have put in a huge amount of imagination and effort into their creations.

“There are lots of bold colours, stunning examples of wateriness with bubbles and ripples, exceptional blending and younger children pushing pencil crayons to the limit.

“Some draw on personal experiences, others create a magical or sombre atmosphere.”

Laura Porter, reception teacher at Trinity, said: “The workshop has been exciting for the children — they’ve all enjoyed it.”

The Arts Society Henley provided volunteers to help at each of the art workshops.

“The artists are mesmerising and their work is very diverse. They open windows in the imaginations of some children that will stay with them forever.”