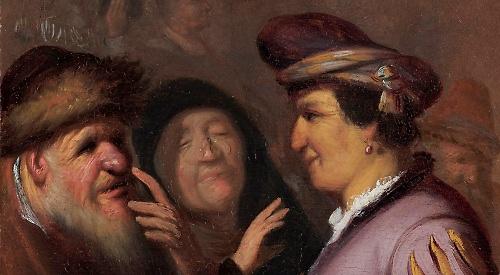 REMBRANDT is one of the world’s greatest artists but he was no child prodigy.

Rather, he made his way by intense study and restless practice, by constant innovation and a dash of genius.

The “Young Rembrandt” exhibition at the Ashmolean shows the extraordinary leap which the painter made over a couple of years in the mid-1620s when he was living and working in Leiden, then the second Dutch city after Amsterdam and now twinned with Oxford.

Compare an early painting like The Spectacles Seller to a scene like The Foot Operation painted only a few years later.

In the first the composition is crammed and people’s fingers look like sausages, while the second is much more dynamic with the patient flinching away from the “doctor” and incidental details like a discarded shoe and a wicker basket finely realised.

The younger Rembrandt might have been a little lacking in technique in his very earliest days but he was never short of confidence or commercial sense.

One of the pleasures of the exhibition is seeing the painter forging ahead both as an artist and an entrepreneur.

Rembrandt frequently depicted himself, whether in drawings, etchings or oils.

An early portrait by the exhibition entrance shows him, shadowed head thrust forward, watchful and energetic.

By the time he moves to Amsterdam in the early 1630s he can afford to portray himself as an elegant man about town, with ornate cloak and curvaceous hat.

He inserted himself into his larger pictures too. Spotting his rather plump face in the crowd is, says
co-curator An Van Camp, a bit like playing “Where’s Wally?”

There are plenty of biblical depictions here, from a sleeping Samson about to have his hair cut off (and so lose his strength) to a penitent, anguished Judas Iscariot casting his thirty pieces of silver to the ground.

It was this last dramatic scene which caught the attention of the ruling family of the Netherlands, and led to more commissions and growing fame.

But Rembrandt was just as interested in scenes of ordinary life. The Ashmolean exhibition, which was first shown in the artist’s home city of Leiden, has sketches and prints of peasants and beggars.

Even a depiction of the biblical Good Samaritan story is brought down to earth by a dog relieving itself in the foreground.

The artist’s female nudes are far from idealised, yet never cold or objective. In the same way, his interest in tracing the effects of age — a preoccupation with Rembrandt from quite early on, with his parents as sitters — combines clear-sighted realism with warm humanity.

Appropriately the exhibition finishes with two pictures, Portrait of a Young Woman and Portrait of an 83-Year-Old Woman.

Look at the almost translucent ruff round the young woman’s neck, look at the inward expression worn by the old woman, and it’s no surprise to learn that by this time (1633-4) Rembrandt was the leading portraitist in Amsterdam.

With pictures drawn from many collections, including some never displayed in the UK before, the Ashmolean’s eye-opening and significant “Young Rembrandt” shows us the astonishing advances which the artist made in less than a decade.