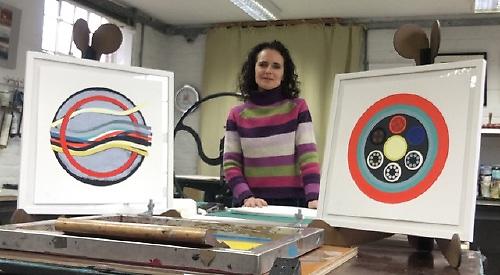 A GROUP of 14 printmakers are pressing ahead with a fortnight-long exhibition at the Old Fire Station Gallery, which opened yesterday (Thursday).

“The Poetics of Print” celebrates the life and works of the former poet laureate, John Betjeman, who was friends with the Fawley Bottom artist John Piper and collaborated with him on the popular Shell Guides series of British county guidebooks.

It was Betjeman who, in his famous ode to the 1902 Royal Regatta, hymned “the brick-warm town of Henley” which he found to contain “the flowering heart of England’s willow-cooled July”.

“The two Johns were in fact good friends and worked together on the Shell Guides as editor and illustrator. These booklets were county guides intended for the new motorists who were exploring the countryside in the pre- and post-war period.

“Both men approached this challenge with a freshness and a quirky style so different from what was then available in the shops.

“They had no regard for ideas of taste and instead saw the beauty in the mundane and ordinary. Both men championed their shared loves — the architecture of the English church and country house.

“John Betjeman was made Poet Laureate in 1972 and his poetry is typically both comic and reflective, suffused with memories and thoughts of how things change and how things used to be.

“His many poems about travel reflect his feelings as he sees the expansion of the train lines around London in the post-war years. These thoughts are also expressed in the documentary Metro-Land that he made for the BBC in 1973.”

Inspired by Betjeman’s poems, “The Poetics of Print” showcases more than 40 original prints by printmakers from the Bodenpress studio in Chesham, Bucks.

Unframed prints and original handmade cards will also be on sale as part of the exhibition, which is open daily from 11am to 6pm.

One of the printmakers will be present at the gallery in upper Market Place every day, with examples of printmaking plates and photos of the artists at work that reveal some of the techniques used.

Helen, who founded the Bodenpress studio in 2008, added: “Printmaking is an intriguing art form as it has so many stages and processes. The plates or blocks are inked and wiped by hand and printed using a traditional etching press. In this modern age it is refreshing to see work that is not printed digitally, with each piece being unique.

“This exhibition is inspired by John Betjeman’s poems, particularly those that describe London and train travel.

“These nostalgic poems with a sense of humour and a serious undertone are good for creating a spark of inspiration.”

A preview evening that had been planned for tonight (Friday) from 6pm to 8pm has been cancelled.