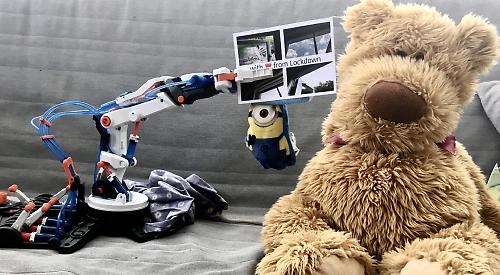 AN artist from Henley has
created an audio diary featuring answerphone messages from people talking about life living under lockdown.

Louise Shaw has edited the recordings to form part of the seventh Warehouse Art School exhibition, called Emergence, based at the Warehouse in Oxford.

The event, which runs until Sunday, features eight artists with work including video, performance, painting and sculpture.

Louise, who lives in Market Place, was inspired by the impact of the restrictions imposed in March by Government to halt the spread of coronavirus.

She has set up a space at the venue to look like a living room with a sofa and tables and a telephone which visitors can use to listen to the recorded messages in an installation she calls After the Bleep.

Louise explained: “When the country was in the early stages of lockdown, when we were being given lots of stats and numbers and there was scaremongering, I just wanted to get beneath all of that and reach the responses of people to life living in isolation. I really wanted to know how people were feeling and what it was like for people on a human level.”

Louise set up an answer machine on her landline and used Instagram to invite people to call her to answer a daily question.

She kept the answerphone running for a month and from this she compiled 35 minutes of responses across nine days.

“I wanted the human voice — I didn’t want it to be typed, otherwise it would have destroyed the sense of what someone really feels when talking.

“The messages that were left were mainly women and some people phoned every day as it became part of a ritual for some to read the question, think about it and then call.”

The questions included asking callers what they had learned about themselves during lockdown, did they keep calm and carry on and did they miss out on what they thought they would miss out on.

Louise said the responses shows how people would work together in a crisis. She said: “A strong theme in the responses was people really loving the small exchanges that were going on between people.

“Someone was talking about a neighbour putting out a message on WhatsApp asking for lollipop sticks because they wanted to make puppets with their kids and they were then being pushed through their letterbox where another person asked for tadpoles for their pond.” At the exhibition, visitors will be able to use a QR code to listen to the recordings on their own device.

Louise, who has a studio in Newtown Road and takes commissions for pet portraits, also created a photograph album which is also on display.

She said: “In my little area there is a table with a red photo album on it called Summertime 2020, with love from Lockdown. The album is more playful and personal. It follows the travels of my pre-covid-19 calendar.

“As a lover of sending postcards, I reversed the norm, sending postcards of my home to the people and places I had planned to visit. Living vicariously through the photos taken by my ‘hosts’.

“My interest is that art is part of life and not just imitating life. Art should allow people to be connected and it should be accessible for everyone. I did a project in Harpsden Wood asking people to write notes and leave messages.”

Organisers are limiting visitors to the exhibition to 20 at any one time in order to maintain social distancing.

• Emergence at the Warehouse Art School, the Warehouse, Oxford, is open daily, from noon to 6pm until Sunday. Entry is free.