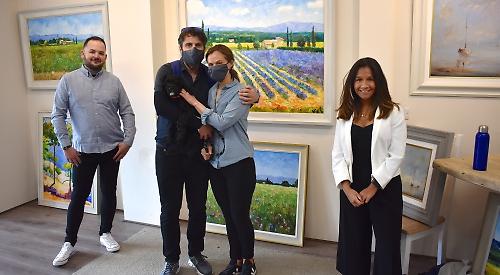 A NEW art gallery opened in Henley on Saturday.

The Henley Fine Art Gallery has taken over the former Louise Claire Millinery in Market Place, which closed four years ago.

Since then, the space has been used by Catalyst Capital, which is carrying out the redevelopment of Market Place Mews, as office space.

Gallery owner Jennie Stuart-Smith said: “We had a really great first weekend and lots of interest. People were saying that they were pleased we had decided to open in Henley.

“I think we have brought something beautiful and lovely to the town and it is nice that people want to come and see what we’ve got on display.”

Mrs Stuart-Smith lives in Barnes, London, where she has run another art gallery since October, and will divide her time equally between the two galleries. The Henley gallery is managed by Lee Dixon, who lives in Wimbledon. It will have three featured artists every fortnight and rotate the paintings. The business works with 22 artists, mainly UK-based, who specialise in landscapes.

Customers are able to loan a painting for a week without charge before deciding if they want to buy it.

The first customers were Charlie and Laura Perkins, of Greys Road, Henley, who wanted three prints to be framed. The gallery was offering a 25 per cent discount on this service to celebrate its opening.