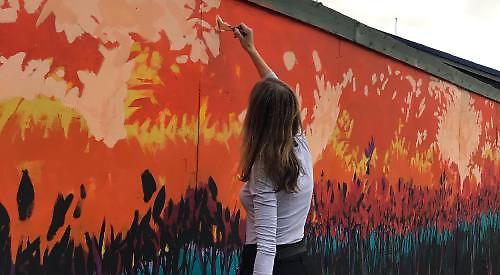 AN artist has produced a 25m long mural to liven up the approach to Henley Bridge from Remenham.

Nicola Sutherland and her husband Justin bought the site of the former Thames Bridge House in the summer and are working on plans for three new flats there.

They live at the adjoining property, called Bird Place, which is next to the Henley Royal Regatta headquarters.

Thames Bridge House was demolished in 2018 after being empty for 10 years and falling into disrepair.

The site is now surrounded by wooden hoardings, which Mrs Sutherland thought would make the perfect canvas for her.

She spent nearly 50 hours over 10 days producing an autumnal scene, which features the sun setting through vibrant red and orange leaves.

She said: “The site has been an eyesore for years. When we bought it the first thing I did was to paint the frontage to blend it into the leafy surroundings but, now autumn is here, it needed a proper update to reflect the changing season.

“It is a rather large space, so it probably needed that many hours. I wanted every little bit of it to be interesting.

“On the first day I completely covered the background layer and then I built it up to give the impression of looking through the trees. I knew it was going to take a long time to get there and I wasn’t very happy with it for the first week.

“I was being influenced by the hot weather and I wanted more of a British autumn. I was using lots of tropical colours and eventually the weather started to change and I got it to look more how I wanted it.

“I’m really happy with it and lots of people have said they think this is the best thing I’ve ever painted. I am starting to believe them!

“Even though I was painting it for the people of Henley, I got to choose the subject myself when normally I am on commission and being asked to paint a particular thing. This was all my own and I was painting for the love of it.”

Mrs Sutherland, 52, who has been a professional artist for all her adult life and specialises in large-scale pieces, chose a natural scene for a reason.

She explained: “With everything that is going on, I thought it was important to cheer people up.

“Even on the first day I noticed how many people were coming up and saying that I had brightened up their day.

“I got such a good response and it made me want to make it really beautiful for them. All artists crave for people to look at what they do and we had a hugely positive response from hundreds of people. It was lovely.

“I wanted to have the sun setting in the middle. The central panel is opposite where people walk up by Leander so I wanted it to dazzle them.

“It was a chance to get lots of pattern in there and bring all the things I love together.

“I would love to be doing large-scale paintings all the time. I’m often doing portraits and sign writing but the thing I’ve always wanted to do is just to be a mural artist or scenic artist.”

Mrs Sutherland has produced other local murals, including one on the wall behind the bar at Magoos bar in Hart Street.

This is a map showing famous people from Henley and significant moments in the town’s history. Her next mural will be in Boroma Way, off Bell Street, which she hopes to start work on before Christmas and will be inspired by Borama in Somaliland, which has a friendship link with Henley.

She is seeking funding from Henley Town Council.

Mrs Sutherland said: “I’m working on the designs at the moment and that was one of the reasons why I needed to finish the mural by the bridge when I did.

“It is really quite a large area that is about the same height and about 20m long.”

But the Sutherlands believe that now it has been absorbed into their land they can succeed where others have failed.

Henley architects Spratley & Partners have been working on designs for the new flats.

Mr Sutherland, who is chairman of Upper Thames Rowing Club, said: “For many years we’ve watched developers go through something like the grieving process people talk about.

“Over time, their enthusiasm gives way to denial, bargaining and regret.

“The problem has been the shape and size of the plot but now we have been able to reconfigure the boundary and provide proper access, it’s a different story.

“Local people will have noticed that it has been like a building site for 15 years and parts of the roof collapsed before it was demolished in 2018.

“We have plans for something a bit different that should work well for the shape of the plot. We’re assessing all our options. We’ve had interest from people in acquiring our house, which is fairly unusual in the town as it has river frontage.

“Our three kids are approaching the age of leaving school and there is a big wide world out there — it would be enjoyable to go and see some of it.”

Bird Place, a Queen Anne period property, has been in Mr Sutherland’s family since 1968 and has had only two owners in nearly 100 years.

He said: “When I spoke with Jeremy Spratley, we talked about the importance of respecting the surrounding buildings and we are working towards a design that references Henley’s riverside traditions and looks like it has been there for years.

“We’ve reduced the previous plans for five small units to three large apartments, all with day-long light and views across the river. It should be a fantastic development with big, spacious flats.

“I’m sure the apartments at Thames Bridge House, or Regatta Wharf, as we are thinking of calling it, would be highly sought-after.

“There’s obviously the local market to consider but agents report record numbers of buyers from London moving out to places like Henley.

“We would hope to have plans in place before Christmas. At that point, if somebody wants to acquire both properties for a mixture of residential and office use. or whatever, then we would be in a position to assess our options.”