Artists are back on the trail with autumn show 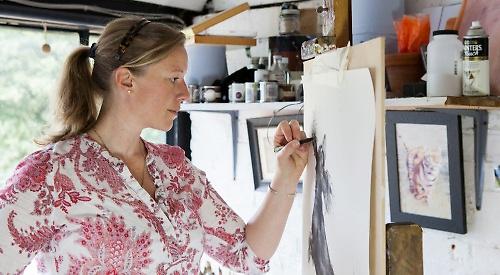 A GROUP of artists associated with the Henley Arts Trail are hosting a scaled down and socially distanced version of the event this weekend.

With four venues set to open their doors — in Henley, Shiplake, Twyford and Hurst — the event is being billed as an autumn show.

It includes five online exhibitions that can be accessed via the Henley Arts Trail’s official Facebook and Instagram pages.

Understandably enough, she is keen to avoid direct comparisons with the annual May bank holiday weekend event — which had this year been due to feature the work of 200 artists across 36 venues.

Until it was derailed by the government’s decision to lock down the country, this year’s trail had been due to take place on the weekend of May 2 and 3.

As the chair of the organising committee, Kate vividly remembers a planning meeting for the trail that was held a fortnight before Prime Minister Boris Johnson announced lockdown measures on March 23.

“We were just getting the inkling that things were maybe not going to be as we thought, but at that point it was not definite,” recalls Kate.

“And I do remember — it’s slightly embarrassing — breaking down in tears, because it just hit me that all that work and all that preparation might be for nothing.

“It came as quite a shock to everyone at that meeting when I said ‘Look, there is a fairly good chance that this might not run.’

“I think it was a case of ‘Oh no, we’ll be all right,’ you know? But it was around that time that it was really sinking in about the virus.”

By that point, says Kate, some 20,000 leaflets promoting the trail had been distributed and more than 10,000 visitors were expected. “The reason why it was so bad for us was that we had spent most of our budget at that point already. We’d had the leaflets printed, we’d spent money on the advertising, and it was all stuff we couldn’t get back.”

Kate, who previously chaired the Henley Art and Crafts Guild for nearly 10 years, explains that it was her experience of doing so that led her to found the Henley Arts Trail back in 2006.

“In that time when I was chairman, I was very aware that our exhibitions weren’t that well attended. And that’s what prompted me to set up the arts trail, because I just thought we needed a bigger kind of artistic presence, an artistic community.

“And it worked — it had a massive impact on the numbers then going to the Old Fire Station Gallery. Because that was the thing, we were having these really very nice exhibitions and no one was turning up. And with the arts trail it made a big difference.”

Given all that has happened over the past six months, what led Kate and her colleagues to start thinking about putting on an autumn event?

“Because everything had been cancelled, we wanted to try and get the arts trail finally back in the public eye again. Just to say, yes, we are still here. And also because we wanted to give the option to some of our artists. There are quite a lot of our artists for whom it is their living, and to then have all these events cancelled — the artists are really in a bad place. There are not the places to show your work and therefore sell.

“So it was partly with that in mind, but it was very much about wanting to try and raise the profile again and say we are still creating artworks and want to be able to show you what we’re all doing.

“As a committee we were already beginning to think about how we were going to run next year — and we had to make some decisions on how we thought we could do that. So it tied in with that as well.”

While the venues for the 2021 event have already been confirmed, the organisers say they are prepared for the possibility that the dates may have to change if another lockdown is imposed.

For now, though, the focus is firmly on this weekend.

Shiplake Church Hall Rooms in Church Lane will be open from 10am to 5pm on both days.

Entry is free and the postcode for the venue is RG9 4BS.

In Henley, ceramicist and wood sculptor Margaret Wainwright is opening her studio at 38 Gravel Hill, RG9 2EA — the entrance to which is opposite 100 West Street.

Meanwhile, the Twyford venue at 20 Hermitage Drive, ​RG10 9HS, will be open today (Friday) as well as Saturday and Sunday.

The artists exhibiting are Vanessa Beresford, Neil Onslow and Michael Garaway, all three of whom were previously lecturers in the Faculty of Arts at Thames Valley University and Reading College before leaving to pursue their own professional careers.