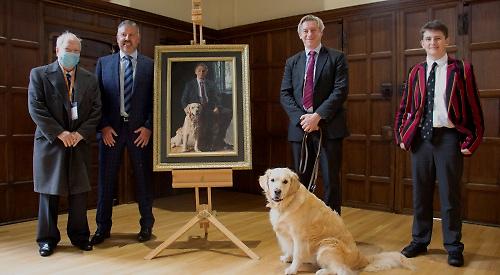 THE headmaster of Shiplake College has received a gift of a portrait of himself along with his golden retriever.

Mr Howe said: “I am truly surprised and overwhelmed by this fabulous gift. The likeness of Simba has blown me away and I am lost for words.”

More than 30 dogs currently live on the school site and three-year-old Simba is the head dog as part of a pastoral team, helping with student welfare and wellbeing.

“We are a very dog-friendly school and dogs are a huge part of the Shiplake family,” said Mr Howe.

The independent school’s annual dog show was moved online this year due to the coronavirus pandemic and the 200-plus entries are currently being whittled down to a shortlist.

Mr Hemsley has agreed to produce portraits of the three winning dogs.

Mr Howe added: “We now have the difficult job of judging them as the quality of entries is really high. We will ask staff, pupils, parents and everyone in the Shiplake community to vote for their favourites.”

The prizes have been sponsored by David Watson, of TriQuant Investments, a hedge fund business based in Newtown Road, Henley, whose son Ben attends the college.

Mr Watson said: “On my first visit to the college, I was struck by the amount of dogs around the place and the friendly atmosphere that surrounded them with both staff and pupils.

“It was a pleasure to team up with Clive to present the headmaster with this portrait and I hope it has provided a bit of a morale boost in difficult times.”

Mr Hemsley, who owns a four-year-old Labrador called Bear, has produced more than 2,000 paintings of dogs, including many for the Henley Standard’s Top Dog
competition.

He said: “I am thrilled to be associated with Shiplake College, who clearly have their priorities right — education and a close relationship with dogs.

“What a superb combination and great privilege for any pupil.

“I’ve always been a dog person — I love all animals, but I am biased towards dogs.”