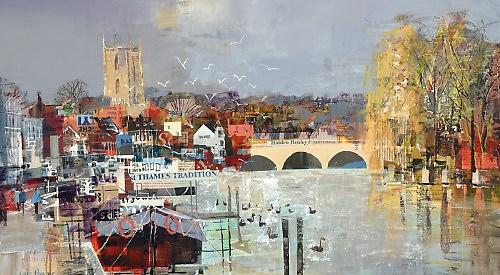 WHEN it comes to artwork produced by Tom Butler it is always worth taking a second look — or maybe even a third.

While the imposing structures or striking colours might at first capture the eye, it’s only when up close you can appreciate the detail and personality of the piece.

Tom uses elements of collage — newspaper cuttings, slogans and statements — to add depth to his paintings.

He has produced new pieces that feature two iconic views of Henley — the town centre on market day and the River Thames.

They are on display at the Lemongrove Gallery in Duke Street, Henley.

Tom had been set to stage a solo exhibition at the gallery in September but this was cancelled by the coronavirus pandemic.

He had come to Henley in early March, before the first lockdown, for some inspiration.

But faced with cancellations up and down the country, he decided to go ahead and produce some paintings anyway

Tom said: “It was lucky in a way because when I came to Henley to take some photographs it was the beginning of March, just before everything changed, so I had something to work from.

“One of things that is important to me is to get some references to the place I am painting so I collect bits and bobs.

“I wandered round the town and popped into the offices of the Henley Standard and pulled a few copies out of the archive to use.

Tom says that composition is key to finding a suitable scene to recreate as a painting.

He said: “There needs to be a balance, a good ratio between the sky and the main objects in view. The one with the river in is a nice angle because of the bridge, the pub and the church all in the background.

“Everybody who knows my work knows I love painting the River Thames because water is something that you can get a lot of energy and expression from.”

Tom says he also likes scenes that have lots going on, such as street markets because they have “a bit of bustle and colour, shapes and action”.

He said: “I took a picture of the market early in the afternoon when there were people milling about. I remember the sun coming out at exactly the right time so the square just popped with colour.” When it comes to putting his paintings together Tom does things a little differently.

“I always try and not go straight for an obvious construction,” he said. “By that I mean, a lot of traditional artists will perhaps start by sketching it out so they have things in the right place and add the sky first.

“I tend to keep my pictures moving in a very spontaneous abstract and random way so I am not deliberately putting things where they should be. In the early stages there is a lot of overlapping so the collage elements are not in the correct place but it gives the piece energy. After that you have to give it a bit more care and consideration and start introducing forms and shapes. It is a gradual process and it is not finishing one area before moving on to the next, it all goes forward together.”

Tom likes to add humour to his pieces without detracting from the overall effect.

“I tend not to put anything important on at the start,” he said. “If you put something powerful or witty in first then you will end up not going near it and it won’t work with what else is there. I do like introducing a comedy element but you can’t make it detract from the look otherwise it becomes satire. I like to have different elements in each picture so you are offering things up to look at all the time.”

Tom says he likes to use a mix of media because they add new levels of detail.

He said: “Certain collage elements lend themselves to certain man-made objects when you place them in the right way but it can come down to luck. There is an awful lot of pulling, pushing and cutting .

“I look to have a mixture of things that can be painted on and still seen through the washes or thick swipes of paint so there are things to look at below or above the surface.

“The exciting aspect is that you never quite know how it is going to work and I do lose sleep over it but it is those little details that people pick up on and using local materials adds some authenticity.”

Tom, who lives near Hartney Whitney, often works on several pieces at once as he fulfils exhibition commitments but admits the pandemic has allowed him to go at his own pace.

He said: “I am producing some of my best work in the process so the break has turned the creative tap on.”